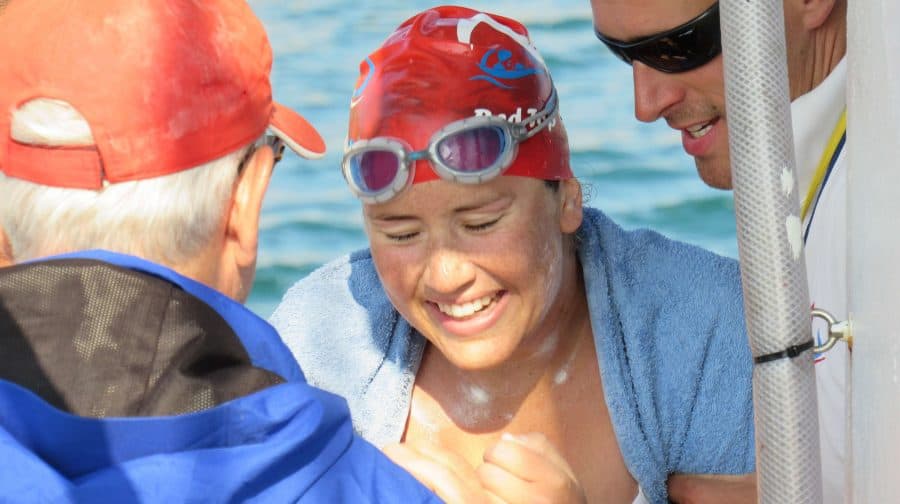 Physio Samantha Poulsen raised over £5,000 with her swim across the Channel

A physiotherapist from Guy’s Hospital was inspired by her brave cancer patients to swim across the English Channel to raise money for charity.

The physiotherapist –  who is originally from Australia but lives in Tower Hamlets – looks after patients on Blundell Ward at the hospital, which specialises in caring for people who have had surgery for head and neck cancer.

Jellyfish, busy shipping lanes, an injured shoulder and a cold water temperature of around 17 degrees were just some of the obstacles she faced during the endeavour. She said: “I have never come across a more resilient and inspiring group of patients. I’m blown away by their determination on a daily basis so I couldn’t think of a better group of people to fundraise for.”

So far Samantha has raised more than £5,200 for Guy’s and St Thomas’ Charity, which helps to make the care provided by the hospital even better.

Samantha signed up for the English Channel swim in March 2017 but dislocated both her shoulders on a surfing holiday a few months later.

She spent the last 18 months training for the challenge up to six days a week, swimming for between three to four hours at a time.

Samantha said: “I grew up by the beach so I’ve always been a long distance swimmer and thrived off crazy challenges.

“Jumping into the water at Dover was pretty surreal and terrifying but I just got on with it. I kept thinking it was such a privilege to be able to do this.”

She added: “My shoulder gave out after four hours so I was in quite a lot of pain the rest of the way. There were also thousands of jelly fish a meter below the surface.

“My fingers brushed the top of them and I was really lucky not to get stung.” Samantha’s parents travelled from Australia to support her and were on the boat with her coach and housemate cheering her on.

Samantha said: “Failure was never an option. I had so many people supporting me and the cause is so close to my heart. I committed the last year and a half of my life to this challenge so I had to keep going.

“The last two hours were a real battle because the tide was so strong. I could see France was really close which was heart-breaking because it didn’t seem to get any bigger.”

The physiotherapist broke into tears of happiness when she finally managed reach the French coast and said despite the pain she “wouldn’t change any of it.”

Kieron Boyle, Chief Executive of Guy’s and St Thomas’ Charity said: “We often hear of patients fundraising inspired by the people who cared for them at the Trust but, as Samantha’s story shows, it also happens the other way around.

“Staff at our hospitals and community sites are our best champions – they tell others about charitable giving, raise funds themselves and they are essential to ensure donations are used to give patients the best care possible.”