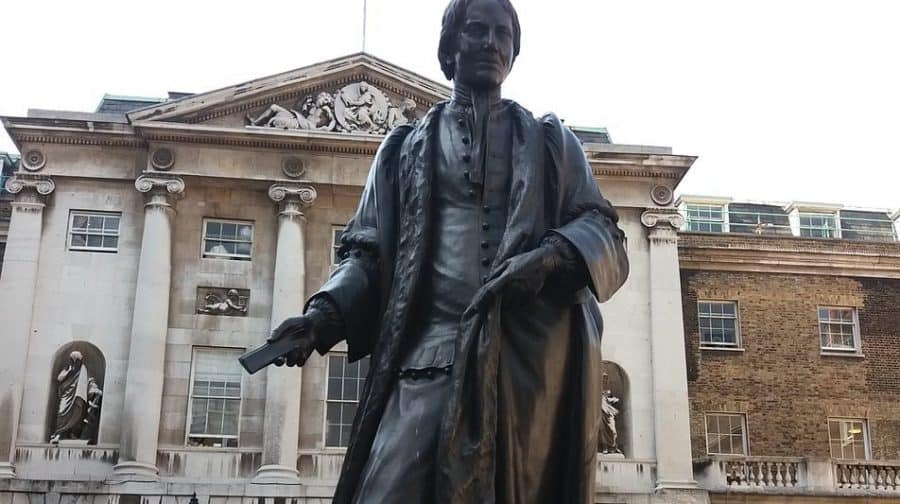 A statue of Thomas Guy

The charity that owns the statue of Guy’s Hospital founder Thomas Guy wants to move the monument “to a less prominent location” due to his investments in a major slave-owning company, following a consultation.

The consultation also recommended that a statue at St Thomas’ of Sir Robert Clayton, who helped rebuild the hospital in the 17th century and also was involved in the slave trade, be kept where it is a because is is not in a prominent position.

Guy’s statue, which is on the King’s College university campus near London Bridge, should be moved to somewhere less visible in the local area, the authors of the consultation advised.

Both statues should be accompanied by historical explanations of how they made their money, the consultation recommended. Guy’s and St Thomas’ Foundation plans to implement all these recommendations. The foundation said it wanted to move both statues in June last year but later withdrew planning applications and began the consultation.

But the changes are unlikely to happen until 2022 at least and could be blocked by the government. Both statues are listed, meaning the foundation will need planning permission to move Guy.

The foundation said that “political sentiment” could be a problem. Culture Secretary Oliver Dowden has been an outspoken critic of statue removal.  He told a museum in Shoreditch that wanted to remove a statue of a slave owner that “the government believes that it is always legitimate to examine and debate Britain’s history, but that removing statues, artwork and other historical objects is not the right approach”.

In light of this the foundation’s legal advice on moving the statue of Guy any time soon is negative. Planning barrister Morag Ellis QC said in her report that the application would likely be “called in” by central government, meaning the decision would be taken out of Southwark Council’s hands. She added that due to the “new” and “politically charged” atmosphere around “contested heritage” she would expect an application to fail in the current climate.

Thomas Guy was a governor at St Thomas’ in the eighteenth century and donated large sums to the hospital. He later founded Guy’s Hospital, a place for ‘incurables’, with an endowment worth about £424m in today’s money.

Much of this came from Guy’s investment in the South Sea Company, which had a monopoly on slave shipments to South America. Guy’s original investment of £45,000 (about £96m in today’s money) helped to finance the company for nearly a decade. His investment appreciated significantly as the company’s stock became the notorious ‘South Sea Bubble’. Guy sold out before the bubble burst, making a huge profit, much of which he invested in founding Guy’s Hospital.

Some are more cautious about Guy’s involvement in slavery. Professor Roger Jones, editor of the British Journal of General Practice, who has been Professor of General Practice at Guy’s, King’s and St Thomas’ School of Medicine, told the News last year: “Guy certainly wasn’t remotely involved in the active business of the slave trade. We don’t even know if he knew that the South Sea company was a slaving company. Of course you assume that he did. It was a government initiative to let the company offer shares, and Guy was literally one of hundreds of people who bought the shares.”

Clayton owned a plantation in Bermuda and was an investor in the Royal African Corporation, a major slave-trading firm, in the late seventeenth century. This is the same company that Edward Colston, whose statue in Bristol was toppled by protesters last year, was a member of at around the same time.

It is “highly probable” that money from Clayton’s investment in the Royal African Corporation was used to finance the rebuilding of St Thomas’, the consultation said.

The fact that both men’s highly successful investments in wholesale human suffering abroad were used to create institutions that alleviated the suffering of poor people in London is the complexity at the heart of the debate.

A common argument against moving or removing statues of historic figures who were involved in the slave trade is that they were people “of their time” – that support for, or investment in, the sale of human beings was commonplace at the time these people lived and so we should not judge them by today’s standards.

David Bryan and Dr Samina Zahir, the authors of the report that resulted from the consultation, argue against this in part.

“While it is true that Guy and Clayton were not exceptional in their investments in slave trading companies such as the RAC and SSC (wealthy men, and some women, from across the social spectrum invested in such companies), there were also contemporaries of Guy and Clayton who critiqued the slave trade and slavery on moral grounds.

“As MPs Guy and Clayton had a platform which they could have used to speak out as others did, but they did not,” they wrote.

The consultation took place from August to December last year, amid a wave of discussion in the UK and other countries about the importance of statues of historical figures. Mr Bryan and Dr Zehir said they understood the complexity and controversy of the two figures and wanted their research to reflect a wide range of views.

The questionnaire was originally intended to reach about 600 people, but ended up being answered by more than 3,000 after it was found and reposted online by Save Our Statues, a group that says it promotes “Great Britain’s exceptional and irreplaceable historical and cultural heritage.”

Save Our Statues’ followers made up at least a quarter of respondents to the survey and appear to have skewed the results. For example, in response to the  “Should we give honour, through statues, to people who invested their money in enslaved people?” 66 per cent of respondents overall answered ‘Yes’.  Of the people who said they were from King’s College, 63 per cent answered ‘No’ to this question.

Some people consulted said the statues made them feel proud to be British. Others said they were a reminder of racism in British society. Mr Bryan and Dr Zahir concluded that, no matter people’s political views, the statues represent something greater than just the two men they depict.

Kieron Boyle, the chief executive, of the Guy’s and St Thomas’ Foundation, said that slavery is part of the charity’s history, and the organisation has a “duty to address” this legacy.

He added: “Being a charitable foundation focused on improving health involves tackling the health inequalities we see every day affecting black communities, and making sure the public realm surrounding hospitals is welcoming to everyone.

“Last year we committed to making decisions on the statues of Sir Robert Clayton and Thomas Guy based on a strong understanding of the facts, and the views held about them. Through the independent consultation, we heard from a broad range of voices, including those communities most local to the statues. We sought to balance these in making our decision.

“The consultation has recommended that we retain both statues in the public realm, provide information explaining how both men made their wealth, and move one of the statues to a less prominent position. It has also suggested that we commission new artistic works to tell the rich story of those involved in the hospitals’ history.

“We recognise that these can be polarising debates and are grateful for the wide range of views that shaped these independent recommendations. We are committed to seeing all the changes through. The pace at which we can proceed will depend on planning legislation and political sentiment, as well as the immediate need to prioritise the delivery of COVID-19 vaccinations on the site of the Thomas Guy statue. We have begun by commissioning comprehensive interpretation to accompany each statue.”

The problem, some may argue, is what constitutes “comprehensive interpretation” of these men’s legacies. As we have seen over the past year, and as the foundation’s own consultation showed, there is no objective history of the impact of slavery on institutions like Guy’s and St Thomas’. Whatever comes out is likely to be coloured one way or the other by contemporary attitudes and prevailing academic thought. One thing is probable: the importance of these statues and others like them will continue to be debated.