Guy’s use robots in lung surgery 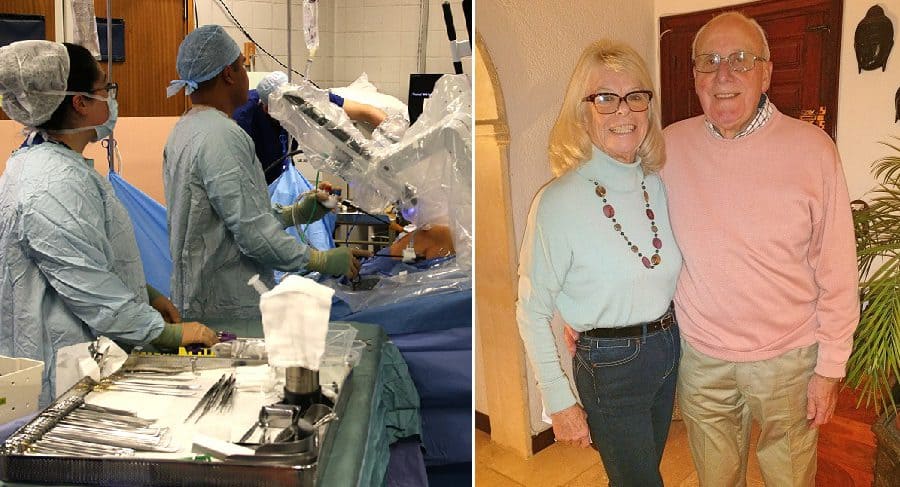 Guy’s Hospital has become one of the first in the UK to use robots to carry out lung surgery, writes Kirsty Purnell…

The robots are being used to remove tumours, in cases where it would be too difficult to access parts of the lung via conventional keyhole surgery.

The da Vinci pair, worth £2 million apiece, are already regularly used across the Trust for kidney, pancreas and prostate procedures.

Mr Tom Routledge, Consultant Thoracic Surgeon at Guy’s, said: “Robotic surgery allows surgeons a larger degree of movement during an operation than conventional keyhole surgery because the robot’s arms have elbows and wrists, whereas traditional keyhole surgery is like operating with chopsticks.”

During robotic surgery, surgeons control the robot’s arms from a console and the machine gives them a 3D HD view while they operate

Joy Barclay-Cooper, 74, was one of the first to benefit from the pioneering procedure at Guy’s. An awkwardly positioned lump on her right lung meant that an ordinary biopsy was not possible.

“I was referred to Mr Routledge at Guy’s who explained that robotic surgery would be the best way to access the area in my lung so that the tissue could be removed and analysed,” said Joy. “He was absolutely brilliant and told me all about the procedure so I felt comfortable and confident to have it.”

“I feel privileged to have had this cutting-edge surgery. I only had minor incisions so the healing process was fantastic. I would truly recommend it. Shortly afterwards the team from Guy’s told me that everything worrying has been removed with a clear margin, so I don’t need any further treatment. It’s marvellous,” said Joy.

Guy’s and St Thomas’s carry out more robotic operations than any other hospital in the country, doing around 450 a year.