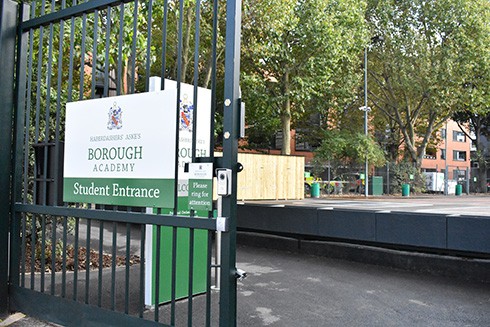 Twenty pupils at Borough Academy have been asked to self-isolate after a confirmed coronavirus case.

A pupil was confirmed with coronavirus at the school on Southwark Bridge Road last Friday.

The entire class was not asked to self-isolate. The school’s principal told the News it was advised by Public Health England and the Department for Education that this would not be necessary.

“Swift action was taken to ask those who had been in close contact with the pupil to self-isolate,” said principal of Haberdashers’ Aske’s Borough Academy, Declan Jones.

“The advice provided was clear,  neither full closure of the school or the entirety of the class was advised or necessary.

“Twenty pupils were identified as having been in close proximity for a sustained time with the pupil and therefore were sent home to self-isolate.”

These twenty pupils are being taught online as they self-isolate, said Mr Jones, and daily attendance of pupils remains around 95%.

A parent of a child in the class told the News they were concerned that children in the class were still in school.

“They selected a number of students from the class and said they must leave the school because someone in the classroom has Covid 19 leaving the other half in school much to my surprise,” she said.

“As there definitely will be cross contamination in the whole class room.”

According to Public Health England guidelines, those who have been in close contact with a confirmed case should self-isolate.

This could be because they have had “face to face contact with an infected individual for any length of time,” or have been within one to two metres with a confirmed case for more than fifteen minutes.

Those who travel in cars with an infected person may also be asked to self-isolate under the guidelines.

Mr Jones added: “I can absolutely confirm that guidance from PHE and correct protocols have been followed at every point to ensure the safety of our pupils and to reduce the risk of spreading the virus.”