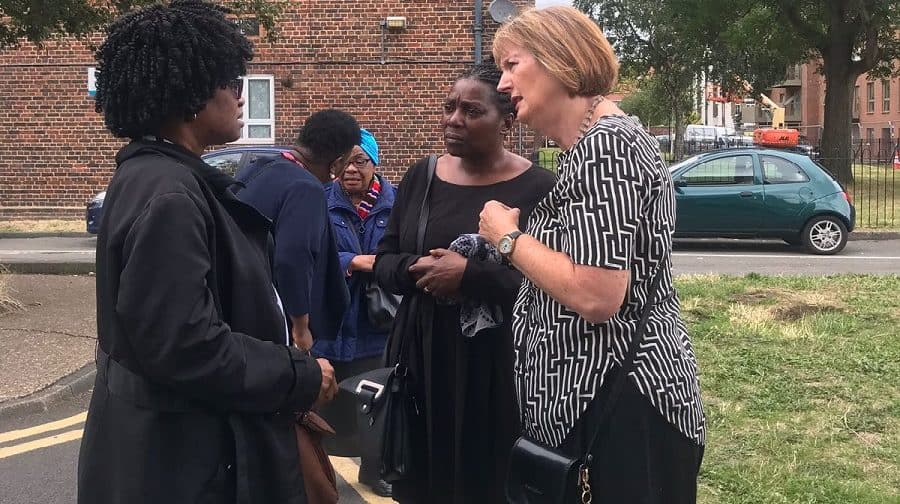 Harriet Harman met residents from Camberwell’s Landor House on Saturday where she promised to help have CCTV installed and lobby for more police officers and better early years support for parents – but faced criticism over “politicians making promises that can’t be kept.”

Outside Castlemead TRA Hall, Harman tod the News: “The community are in shock that this has happened on their estate out on the front doors of their homes.

“My strong view is that this is not something that cannot be stopped, or that nothing can be done about it.

“It is a very, very serious problem – but it can be tackled.”

She said community resources, support for parents and good policing are the answers to this year’s surge in serious youth violence.

“The TRA hall needs to re-open, we need CCTV, more police, more youth services and also support for parents in that early stage of a young boy’s or girls life and help them early on,” she said, adding that it is hoped the refurbished hall will re-open within five weeks.

However, Stephen Bourne, independent advisor to Southwark Police, told the News having attended Saturday’s meeting and a similar event at the Brandon Estate after Rhyhiem Ainsworth Barton was shot dead in May, said he was “concerned about politicians making promises that are not kept or followed up.”

He said: “At meetings with the community they promise to look into the possibility of installing CCTV and to talk to the Home Secretary about increasing police numbers, but there is no evidence that they personally follow through with this.

“We trust them to do the right thing, but we often find ourselves let down and disillusioned, while more and more lads on our estates get caught up in violent crime, which sometimes lead to their deaths.”

“As for increasing police patrols on the streets, we know this isn’t going to happen. The Metropolitan Police just do not have the numbers.

“I am tired of politicians who cut short important meetings in their communities when they see a television camera hovering outside, waiting for them, and then post photos of themselves at community meetings on their twitter feed.”