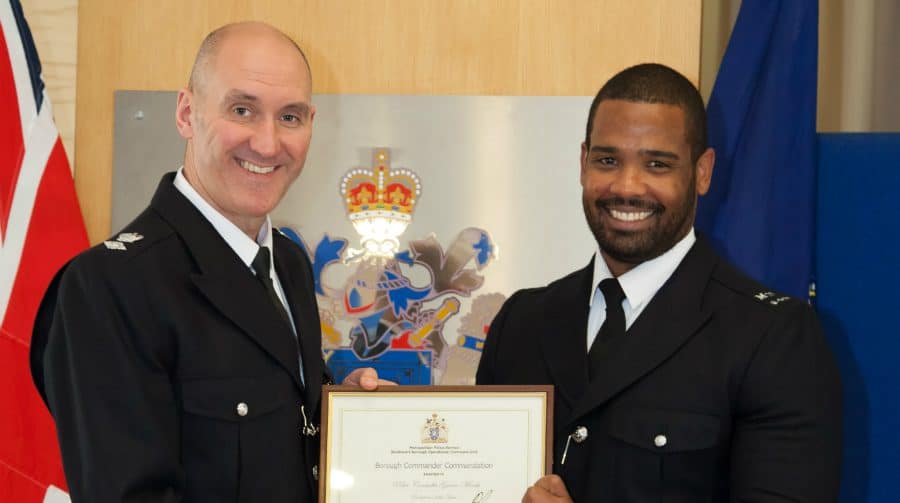 A police commendation given in the name of a Walworth bobby has been resurrected and awarded again for the first time in more than twenty years.

The Probationer of the Year shield was a gift to the force from PC Harry Cole, who was often seen cycling through the streets of Walworth with his helmet at an angle during his 30 years of service.

In 2006, two years before he died, Harry was honoured with a Southwark Blue Plaque, which was placed on the Charles Dickens Primary School in Lant Street, where he was a pupil from 1934 to 1940.

Historian Stephen Bourne was asked to present the award to Probationer of the Year PC Garrio Marsh at a ceremony on July 29, as he had originally championed PC Cole to win the Blue Plaque.

Several other officers were commended for their courage and detective work including Inspector Duncan James and Police Sergeant Dan Marshall, who received an award for bravery, resilience and dedication to duty during the apprehension and arrest of two violent suspects during a dangerous car chase in which both officers were injured

Borough Commander Zander Gibson said “The people who were commended represent the very best of the good work that goes on every day in this borough and across the Met.

“I’m pretty sure there are a number of people who still remember PC Cole and I didn’t take much persuasion to re-instigate this award for a new generation of cops.  I felt it fitting that Stephen present the award as he was instrumental in its re-discovery and I’m grateful for his involvement throughout