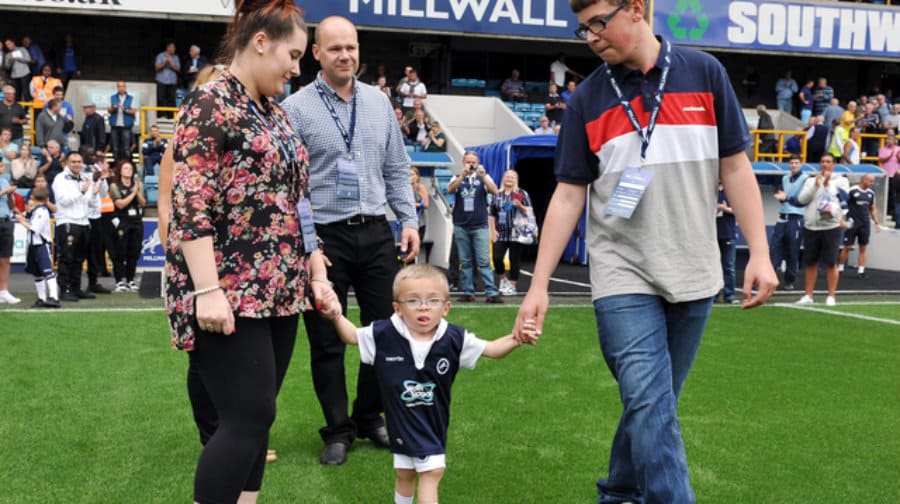 Harvey is led onto the pitch at the Chesterfield game

A Millwall-mad six-year-old’s dream came true last week when he got to have breakfast in the Den and then got a roaring applause from Lions fans as he was escorted out on to the pitch at the game on Saturday.

Little Harvey Brown, who suffers from an ultra-rare disease, was also mentioned in the match programme, which urged supporters to go online and sign a petition to get him the life-changing drugs he needs from the NHS. His case has been championed by the News, and it is hoped that the welcome by Millwall will help to garner more signatures for the petition.

Harvey and his dad, Dean Brown, 45, of Galleywall Road, are such big fans of the club that they named their goldfish after Danny Situ, so it was a good day for the pair of them on Thursday when they were served a breakfast of champions at the Zampa Road club.

Republic of Ireland goalkeeper David Forde gave Harvey a personalised pair of his gloves and Welsh international striker Steve Morison handed over a signed pair of boots. Assistant manager Dave Livermore threw in a signed top and a one-to-one training session on the day. Harvey also got to interview his favourite player Fred Onyedinma.

Harvey’s mum, Vikki, 46, said: “It was a brilliant day from start to finish. We can’t thank Neil Harris and all of the players for helping to make it such a memorable time for Harvey.

“People often ask me why I support Millwall and I think that what has happened today answers that. It’s a very special club and the support we have had helping with our petition, and everything else, has been simply incredible.”

Millwall manager, Neil Harris, said: “You could tell from the smile on his face that he thoroughly enjoyed his visit. Harvey really is a cracking young man.”

“Harvey and his family are going through a bit of a difficult time, so for him to visit us and meet some of his heroes is really special.

“If us giving up our time has helped just that tiny little bit then we’re very proud because it is important that the club maintains such close ties to its supporters.”

Harvey with his favourite player, Onyedinma

Southwark NewsNewsHarvey Brown , 6, has dream come true on VIP trip to the den