“The school has changed in every way you can imagine,” Mr Macauley said. “The quality of teaching, the level of outcomes, the culture of learning. The children want to learn and they really love coming to school here.” 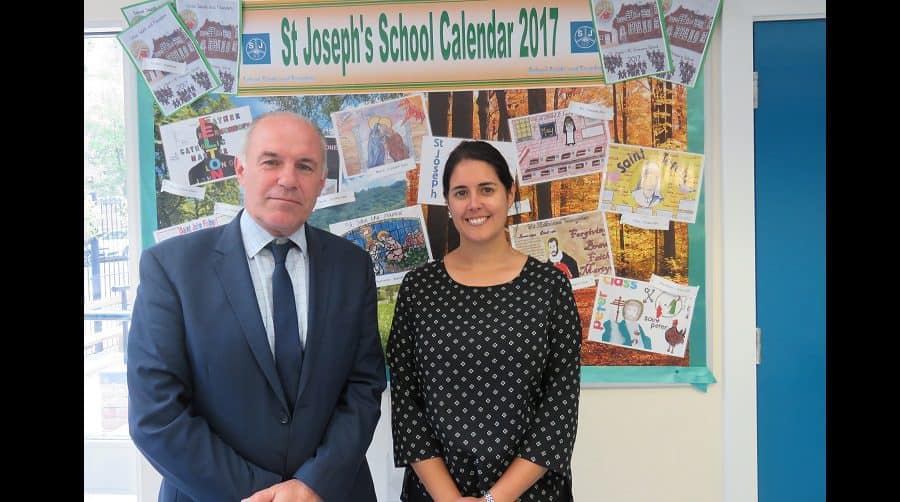 The headteacher and deputy head at St Joseph’s Primary in Bermondsey are handing over the reins to a new team, after a combined total of 48 years at the school, Becky Morton writes.

Mark Macauley, who retires this year, has taught at the school for 31 years and has held the position of headteacher for 23 years. Anne Alford has taught at St Joseph’s for the whole of her seventeen-year career so far, spending ten years as Deputy Head. Many current parents were even taught by Mr Macauley when they attended the school themselves.

Mr Macauley said: “I think it’s the right time now for me to move on. The team coming in are all appointed from within and they’ll make an excellent management team.”

Miss Alford is planning on taking a break from teaching and considering retraining as a speech and language therapist or possibly teaching abroad.

“I think it was just a case of now or never,” she said. “It’s a lovely school and it would have been easy just to stay on but I think it is time for a change.”

The school had been put into special measures just before Mr Macauley became head but the pair turned it around to be consistently rated “outstanding”.

“It’s quite a challenge to maintain the school at outstanding,” Miss Alford admitted. “Now there’s a lot of expectation to the point that people are actually moving to the area so their children can go to school here.”

“The school has changed in every way you can imagine,” Mr Macauley said. “The quality of teaching, the level of outcomes, the culture of learning. The children want to learn and they really love coming to school here.”

In the mid-80s Mr Macauley worked as a firefighter alongside his role as a classroom teacher.

“I worked on a shift system. There would be some times when I would teach all day and then be on night shift before coming back to teach the next day. At that time there was a shortage of teachers so the school wanted me to do what I could do,” he said.

“But it was really enjoyable. Both jobs involved a different skill set so even if I was tired I still came in the next day feeling refreshed,” he continued.

The school suffered its own devastating fire in 2006, which left the building badly damaged and closed for a month. But both teachers recall the community support in the aftermath as one of their highlights.

Miss Alford said: “It was amazing to see how much they valued the school. Parents wanted to do everything they could to help get it back up and running.”

In the school’s transition year, the pair will be staying on as governors to support the new senior management team.

“We’ve invested a lot in the school, it’s like our baby. We want to make sure we’re there to support the new team going forward and reassure parents,” Miss Alford said.