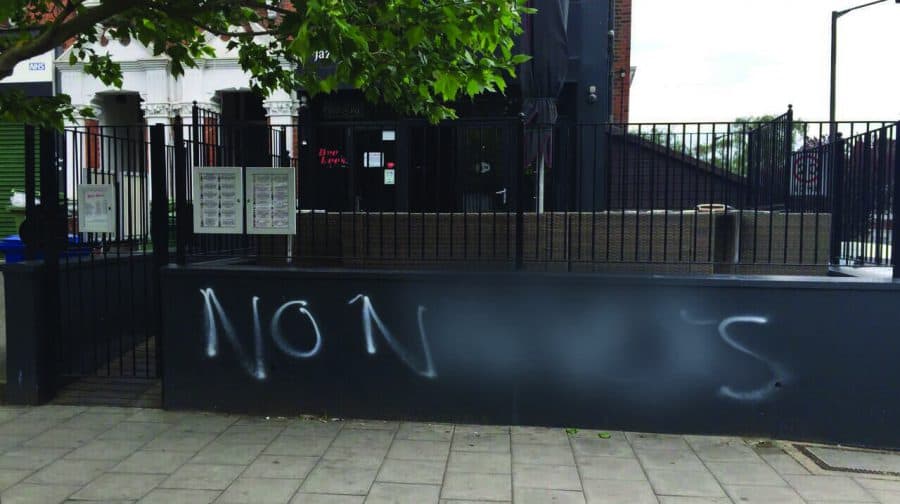 A head teacher has condemned the “trial by social media” of one of her teachers after he was falsely accused of daubing racist graffiti on the wall of a Herne Hill bar.

Sonia Case has issued a statement addressing the “hate campaign” launched against her Dulwich Hamlet Junior teacher, Thomas Turnham, after he was wrongly suspected of painting the phrase “No n*****s” on the side of Dee Dee’s Jazz and Funk bar in Herne Hill Road last Monday.

Mr Turnham said he received death threats and abusive messages on Twitter after some users falsely named him as the culprit of the racist graffiti.  One message read: “You are a disgusting racist we found you RIP?…” tagged with a picture of his flat.

The school’s statement clarifies that Mr Turnham was in fact in the Lake District when the incident took place and so could not have been responsible.

Ms Case said she received some “plainly ridiculous” emails after a petition was started online by people as far afield as Huddersfield to have Mr Turnham sacked.

Some correspondents even accused staff of being holocaust deniers, according to Ms Case, which she said had “a particular irony given that both my parents were refugees from Nazi Germany.”

“Why do we think it’s acceptable to ‘lynch’ someone on social media,” added Ms Case, “rushing to judgement, deciding they’re bad before they are good, making terrible assumptions about them and potentially destroying their lives?” Ms Case is now demanding an apology from Mr Turnham’s anonymous attackers. “We would politely request that all those responsible for promoting the vile social media campaign get in touch with the school to acknowledge that they have behaved badly and apologise,” she said.

Police investigating the offensive graffiti said they suspected a group of tourists from oversease who were staying in flats nearby were responsible and confirmed Mr Turnham was not a suspect in the investigation as he was out of London at the time.