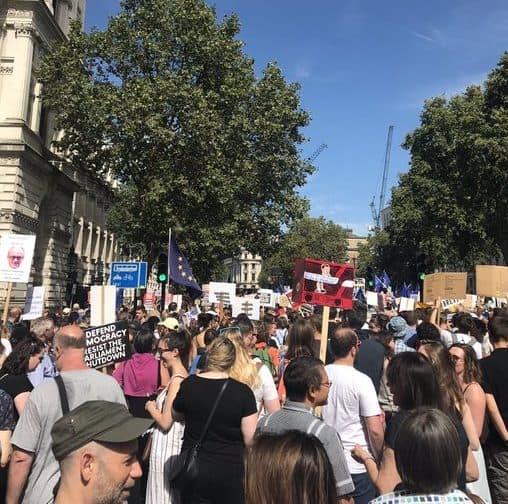 Dulwich and West Norwood Labour at the #StopTheCoup rally

Helen Hayes was joined by dozens of Dulwich and West Norwood Labour members today in the mass demonstration against proroguing Parliament.

A petition against the move has gained more than 1.6 million signatures and reached across party divides.

She described the announcement that Johnson’s Government would shut down Parliament for five weeks as an “outrage”.

Others aghast at the turn of events include ex Tory leader and PM John Major, who has launched a legal challenge, Michael Hesltine and Ken Clarke – who has been mooted as a potential leader of a ‘National Unity Government’ – as has Camberwell and Peckham MP Harriet Harman.

One-hundred-and-sixty MPs have signed the Church House Declaration, which states that they “pledge to work together across parties and across our nations to do whatever is necessary to ensure that the people’s voice is able to be heard.”

The declaration says: “Shutting down Parliament would be an undemocratic outrage at such a crucial moment for our country, and a historic constitutional crisis.”

Despite protests, the Queen approved the order, which means Parliament would be suspended from Monday, September 9 at the earliest, and no later than Thursday September 12, until October 14.

In total this would last 34 days – much longer than is normally the case, although this does include the three week conference season.

Those against believe it is a tactical move for a No-Deal Brexit to bypass Parliament, though the PM has said the decision was a result of the last parliamentary session being longer than usual, and that the break will help him bring new legislation forward.

Hayes has committed to oppose Johnson’s plan “with every fibre”.

Good to be with such a big group of @DaWNLabour members heading to Downing Street to protest against Boris Johnson’s outrage – will we not let him shut down our democracy; he has no mandate to act. People are filling up Whitehall and our voices will be heard #StopTheCoup pic.twitter.com/sJXfeXsfQm

Although she has strong support from her constituents, a majority of whom back Remain, a significant minority of Leave voters have felt increasingly alienated by their Remainer Southwark MPs.

One strongly responding on Twitter: “You are my MP. I voted to leave the EU. When you have finished congratulating your anti-Democratic friends perhaps you could explain to me why you think my vote is worthless?”

The #StopTheCoup protest shut down Westminster Bridge, with Waterloo Bridge and Trafalgar Square both occupied with protesters chanting: “He shut down our Parliament, we shut down your streets.”

100.000 people are here, young and old, Remainers and Leavers, united and determined to #StopTheCoup pic.twitter.com/mEB8xbohEd