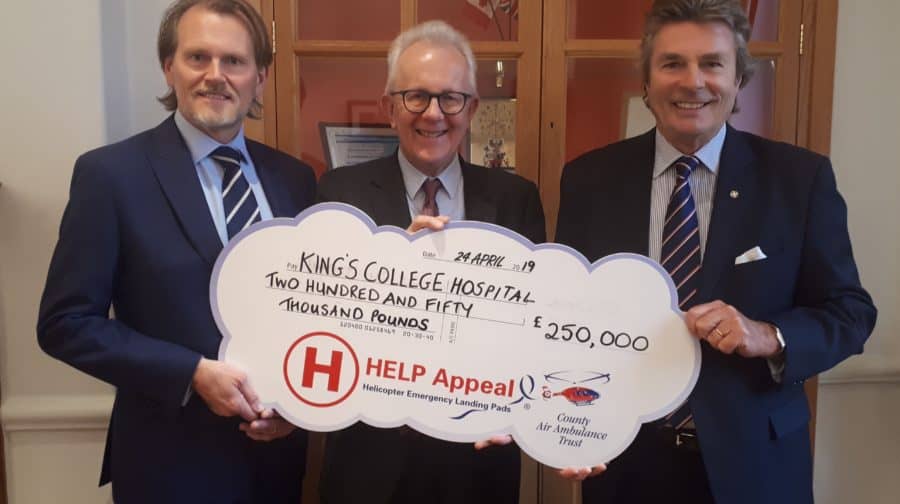 Rob Bentley is a cranio-oral and maxillofacial surgeon as well as clinical director of south-east London’s trauma network, which directs patients with serious injuries to the most appropriate A&E centre.

Before the helipad was built, the air ambulance had to land in a nearby park with patients then travelling by road – often adding up to 25 minutes to the journey when traffic was heavy.

Since then, the helipad has had 475 patient landings and, in February of this year, the hospital gained planning permission for new lighting to allow air ambulances to fly throughout the night, serving a population of 5.5 million people across south east London and Kent 24/7.

The announcement of his new role was made as the HELP charity’s chief executive, Robert Bertram, presented the penultimate instalment of £250,000 towards a total of £2.75 million pledged.

He said: “I’m delighted that Rob Bentley accepted our invitation to become vice president of the HELP appeal.

“He has always been a huge advocate of the charity within the NHS and will undoubtedly continue to raise awareness and encourage hospitals that urgently need our help to get in touch.”

Mr Bentley said: “Since the helipad opened, patients can fly from Margate to King’s in a total of 25 minutes.

“The HELP Appeal has played a huge part in helping King’s save lives.”