During World War Two the site was badly damaged, but served throughout as a fire service river station. Then in the 1980s it became Surrey Docks Farm. 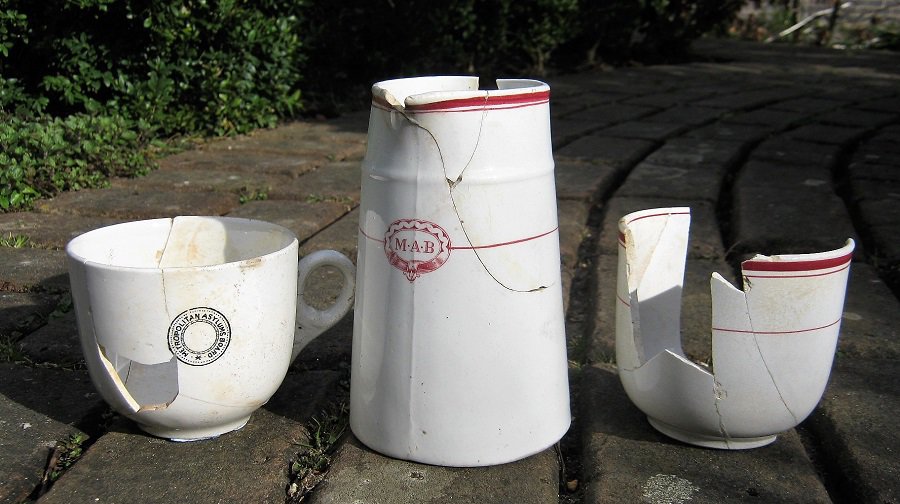 A farm built on­­­­­ the site of a former river ambulance receiving station is looking for the missing pieces to an historic crockery set.

In a former life, the site of Surrey Docks Farm, in Rotherhithe Street, was home to a receiving station named South Wharf, set up by the Metropolitan Asylums Board in 1883.

The station was used to transport thousands of smallpox and fever patients by river ambulance to isolation hospitals in the Thames Estuary for 50 years.

Large amounts of crockery, which would mostly have been used by staff living on the site, eventually ended up in the river.

Hundreds of fragments of these have now been found on the foreshore, and volunteers have discovered that many of these fit together.

“We have now pieced together some near-complete plates, jugs and cups, but there are still many missing fragments” said Germander Speedwell, project co-ordinator of the farm’s history trail.

“We think that local people may have picked up pieces in the past and not realised they were connected with the site’s history.

“You may have the missing piece – or pieces – at home, that may help us to achieve our aim of completing a tea set by the autumn.”

The crockery pieces to look out for are mostly white, with bands of varying colours, and often marked MAB or LCC.

Most of it comes from the Metropolitan Asylums Board, but some is from the London County Council which ran the receiving station in the 1930s.

Some of these later pieces appear to be fire-blackened and may have ended up on the foreshore due to the Blitz.

“We have even found on the foreshore here some sections of plate from the eccentric-looking hospital ship, the Castalia, which was moored with the other ships near Dartford, and would love to find more pieces to be able to assemble a full plate,” said Germander.

During World War Two the site was badly damaged, but served throughout as a fire service river station. Then in the 1980s it became Surrey Docks Farm.

The crockery, in the process of reconstruction, can be seen in the display cabinet on the farm’s riverside path.

From Full Houses to Home-Schooling

Visions as Our Exile