Help, we have a squirrel in our loo!

RSPCA called by students who found a squirrel in their toilet 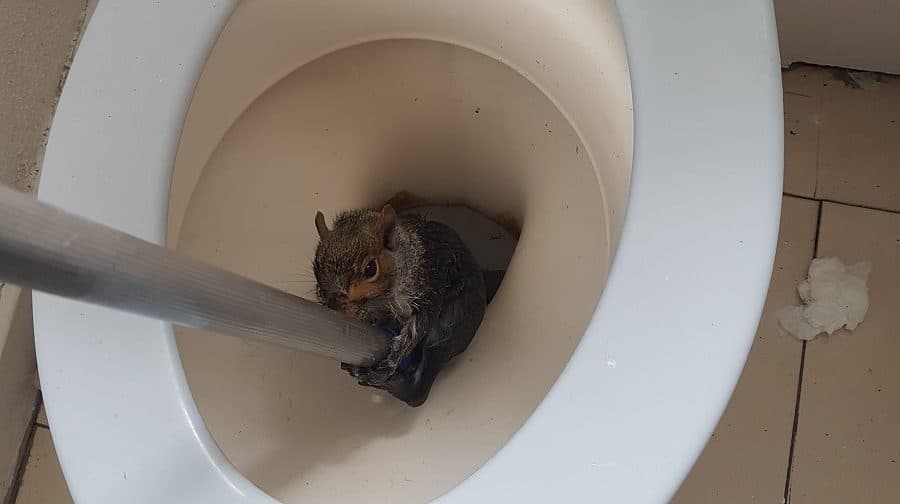 An RSPCA officer used a mop pole to rescue the squirrel

A distressed squirrel had to be rescued from a toilet in a student flat this weekend after becoming stuck. Wrapped warm up after its ordeal

RSPCA Animal Collection Officer Kirstie Gillard was called on Sunday, May 13, by worried students from a house share, who had found the squirrel trapped in their loo.

Ms Gillard used a mop handle to lift the animal to safety, before it was cleaned off, dried in a nice warm towel and released.

She told the News: “Fortunately the squirrel wasn’t injured at all and I could release him back into the wild where he belongs.

“I think he must have come into this house through the roof and slipped into the toilet.

“It was certainly one of the most unusual rescues I’ve ever carried out – I did rescue a bat stuck in the plughole of a sink last year, but I think this one takes the crown!

“I’m sure it’s one the squirrel ‘walnut’ forget in a hurry.”

Other bizarre calls taken by the RSPCA across the country include a gull which fell into a vat of cold Tandoori curry, turning him bright orange, a sheep with a traffic cone stuck on her head, a Lhasa Apso dog trapped in an electric reclining chair, and a corn snake inside the head of a vacuum cleaner.

Southwark NewsNewsHelp, we have a squirrel in our loo!