Here’s how Southwark’s London Marathon 2017 runners got on 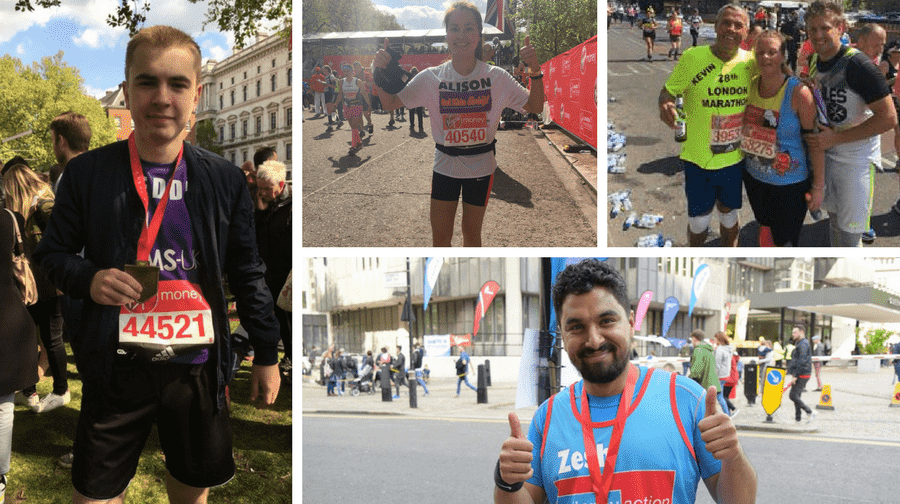 Among the thousands of runners taking part in last weekend’s London Marathon were plenty of local people who were greeted with huge cheers as they came through the borough around the half way mark.

Here’s how they got on:

First ever marathon – and first ever race – to raise money for London-based charity Get Kids Going.

The 24-year-old, who lives in Borough, is keen to raise £2,000 to help get disabled children the equipment they need to get involved in sport.

The 41 year-old  Royal Mail lorry driver, from Rotherhithe, said a heel injury held him back after mile fourteen – but he smashed his fundraising target for VICTA, a charity for blind and partially-sighted children.

Kevin Downey, 58, ran his 28th London Marathon after he pledged to run one every year after his daughter Laura was born prematurely.

He ran alongside Laura, 31, and her boyfriend Charlie for the charity DEBRA – “for people whose skin doesn’t work” – after hearing about Rotherhithe girl Maisy Keetch, who suffers from epidermolysis bullosa.

“It’s one of the best ones I’ve been to so far; the people were amazing in Rotherhithe and Blackheath,” said Kevin, who lives in Bermondsey. “I’m going to do two more and then it will be my 30th London Marathon and I’ll be 60 so I’ll hang up my trainers.”

Kevin has so far raised £2,735 for DEBRA: https://www.justgiving.com/fundraising/Kevin-Downey28

Tthe 41-year-old meteorologist said he was privileged to run for the charity, that Prince Harry and the Duke and Duchess of Cambridge are energetically spearheading. The royals met Frank before the start.

Sam ran a personal best – and in the process raised more than £2,000 for a new playground at Heber Primary School, in East Dulwich, which his two children attend.

In support of Epilepsy Action. The 32-year-old from Nunhead, who himself has epilepsy, has managed to raise more than £1,000 for the charity.

He ran in memory of his late friend Tommy Blackmore who tragically died in 2015 aged just twenty after he was punched in an unprovoked assault.

“It was going really well and then I picked up a hamstring injury at sixteen miles and a calf injury at nineteen which slowed me down and put me through agony for the last part,” said Freddie, who lives in Rotherhithe. Freddie has almost reached his fundraising target of £2,000 for Multiple Sclerosis UK, a charity that has helped look after Tommy’s mum, who suffers from MS.

After entering the marathon at the behest of his boss, the 29-year-old ran for Community Southwark, the charity group which he works for, and was cheered by his work mates at the 21-mile point.

The 39-year-old Walworth girl’s fundraising page currently stands at £1,714 – all going to the St Christopher’s Hospice in Sydenham.

Labour councillor for Newington ward beat his target by one minute and is almost at his £1,500 target for the Mayor of Southwark Common Good Trust, Surrey Docks Farm, and the National Autistic Society

The 50-year-old Lib Dem councillor for Bankside  said he was “back on the campaign trail” knocking on doors for the Lib Dems by Monday, despite feeling like he “couldn’t get upstairs”.

He has raised about £4,500 from 150 donations to the Mayor of Southwark’s Common Good Trust, Surrey Docks Farm, and the National Autistic Society.