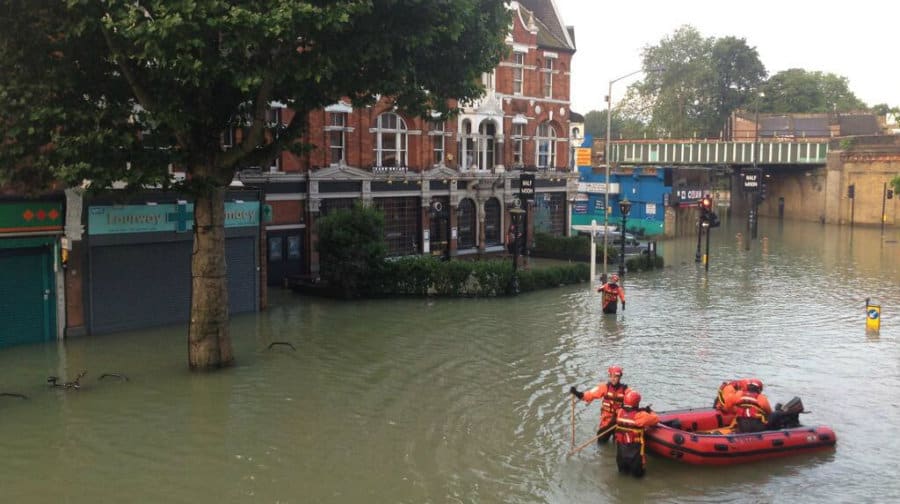 The borough’s political heavyweights have called on insurance companies and Thames Water to finally “make good” their debt to victims of the 2013 Herne Hill flood.

Many traders are still engaged in frustrating insurance and compensation negotiations, over two years after a broken Thames Water pipe sent a devastating waist-high wave of water across the Half Moon Lane area.

With no relief in sight, Southwark Council Leader Peter John and MP for Dulwich and West Norwood Helen Hayes are both now demanding an improvement to the “completely unacceptable” response.

Many traders, such as Ken Gangadeen of Half Moon Food and Wine and Tamara MacFarlane of Tales On Moon Lane, were forced to spend thousands of pounds of their own money following the August 7 flood.

Ken said: “I spent £15,000 myself, which was only partially covered by Thames Water. In the end, we were forced to cut ties with Londis because we weren’t selling enough after the flood.

“This meant we lost discounts and credit. We gained a bit of freedom by becoming independent but we had to raise prices and so lost customers. The insurers and Thames fought over every technical issue, like not paying back VAT on damaged stock.”

Ken of Half Moon Food and Wine.

Tamara had only just finished repaying a loan that she had incurred following a previous flood when her children’s bookshop was destroyed once again.

She said: “Dealing with insurance has been worse than the flood. It’s been absolute hell. We lost every bit of paperwork and accounts. The records that we do have are with our accountant, who we have to pay every time we need to access them. At the moment we can’t afford to pay our account, so everything is sort of on hold.”

The owner of the first business to re-open following the flood, Just Williams toy shop, also bemoaned the glacial speed of insurance negotiations.

Tamara (left) and her staff at Tales on Moon Lane

Vicky Brown said: “It wasn’t so much Thames Water that was the problem but the insurance. I spent a long time on the case and absolutely bust a gut to get us back open. Because we have other branches we could just about survive, but it was very hard and a lot of cuts had to be made. At one point we didn’t even have any plastic bags to hand out to customers.”

Cllr John pointed the finger of blame at Thames Water and demanded a solution.

He said: “It’s incredibly disappointing to say ‘well, we’ve fixed the pipes, now it’s okay.’ It takes these traders years and years to become successful, and years and years for Herne Hill to develop as a shopping district. Now it’s been set back.

“I look to Thames Water to make good. You caused this, now it’s up to you to use your influence to influence the insurance companies who are not paying, or to pay it yourself. They have been making the right noises – but they can’t walk away now.”

She said: “There has been far too much delay on the part of insurance companies in settling claims, and Thames Water has also been much too slow to respond to offer appropriate levels of compensation.  The Herne Hill flood should not have happened – a water main of the size and age of the one running through Herne Hill should have been subject to much more careful monitoring and earlier replacement to avoid this disaster.

“I am calling on Thames Water to act swiftly to provide additional compensation, before we see any more much-loved local businesses close.”

Just Williams during the flood

The memories of the devastating flood will live long in the memories of local traders, who see reminders all around them. For Ken, it is the water stains on the walls of his basement or the cat he adopted in order to chase out the rats that poured into the shop. For Tamara it is the weather – “every time it rains, my heart stops.”

For most, however, it is the constant wrangling with insurance companies or Thames Water that means, even two years on, the memories of the flood are as fresh as ever.

A spokesperson for Thames Water said: “We’re really sorry to hear businesses are still recovering and we’re meeting with them to ensure all outstanding claims are resolved. To date we’ve paid over £3.6 million in compensation through individual claims and tried to ensure all insurance claims made with us directly are settled as quickly as possible.

“We also donated £100,000 to match LB Southwark’s community fund in 2013 to support the business community. Many businesses opted to claim through their own insurers, but we are happy to review all cases.”