'The station, at the heart of our community, is a place through which countless men passed on to France and Flanders, and seems the most appropriate place for a permanent memorial' 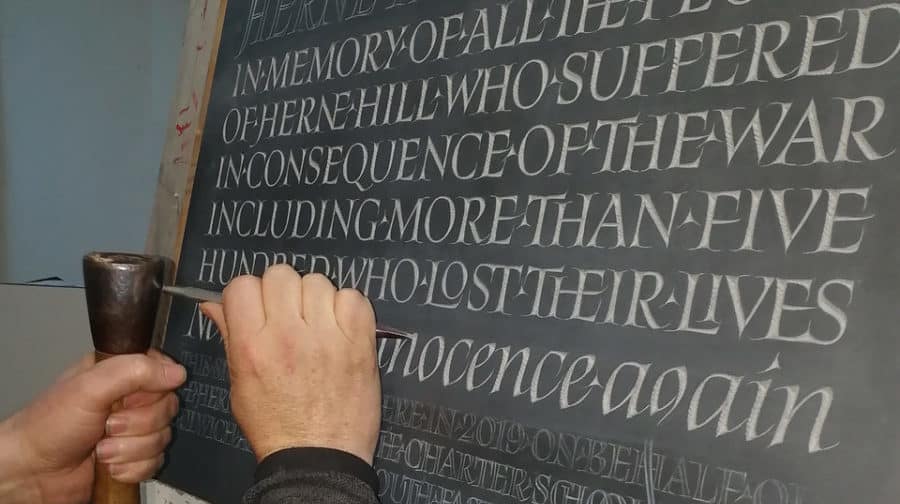 The hand-engraved monument, carved from Welsh slate, was commissioned by Southeastern rail in association with the Herne Hill Society.

Carved by Kent-based artist Mark Brooks, the plaque commemorates servicemen from Herne Hill who died during the First World War, civilian fatalities, and all who suffered during the conflict.

It is being installed in the newly refurbished ticketing hall thanks to funding from the National Lottery for a wider project which includes the creation of a database of all those who served and died in World War One from SE24.

So far, volunteers including students from the Charter School North Dulwich have found 530 records of service men, their families, and local people involved in the war effort including those born outside Britain.

The unveiling on Sunday will be followed by a performance of The Last Post, by musician Walter Feeny, before a two minutes’ silence at 11am.

Herne Hill Society chair Colin Wight said: “When we began our National Lottery-funded research project together with the Charter School North Dulwich two years ago I never imagined that it would lead to the creation of a new First World War memorial.

“I would like to thank Southeastern, who have generously funded this superb artwork, and in particular their managing director, David Statham.

“The station, at the heart of our community, is a place through which countless men passed on to France and Flanders, and seems the most appropriate place for a permanent memorial.”

All are invited to the public unveiling, at Herne Hill Station on Sunday, November 10, at 10.45am.