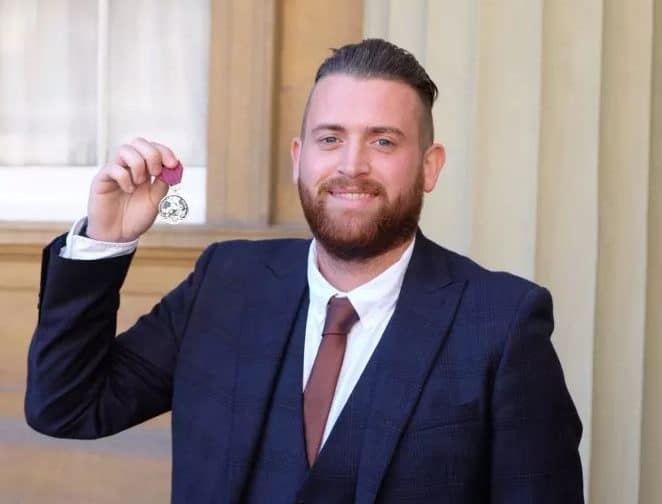 Hero copper Charlie was awarded the medal for courage in the face of extreme danger (Image: Met Police)

An off-duty copper who confronted armed terrorists during the London Bridge attack has been awarded the prestigious George Medal today for his bravery in the face of danger.

PC Charlie Guenigault, along with two colleagues from the British Transport Police, was awarded the bravery medal by the Queen at Buckingham Palace today, (Thursday 11 October.)

PC Guenigault had been enjoying an evening with friends after his shift when terrorists drove a van into pedestrians on London Bridge before launching a knife rampage in Borough Market on June 3rd last year.

Hero Charlie ran towards the attackers unarmed to stop them attacking other officers – and suffered serious injuries to his head, back and stomach.

Cressida Dick, Commissioner of the Met Police, said: “That summer night whilst out with friends, Charlie ran towards danger, simply intent on protecting fellow officers and members of the public.

“Charlie’s bravery undoubtedly helped others, and despite suffering serious injuries he continued without a single thought for himself.

“I know that I speak on behalf of all of my officers and staff, when I say how immensely proud we are of Charlie.”

Eight victims were killed during the terrorist atrocity, including heroic Ignacio Echeverría, 39, who stabbed to death as he tried to rescue a woman from the terrorists by hitting them with his skateboard.

Modest Charlie said: “I am so honoured and humbled to receive the George Medal and I am so glad that I get to receive this in front of my family.”

“I hope that I have done my friends, family, colleagues and the nation proud.

“I would like to thank everyone who has helped me throughout the past year – especially those who helped to save my life.”

The gallantry list citation added: “PC Guenigault was off-duty when he showed exemplary action in response to this terrorist attack.

He tried to protect fellow police officers and members of the public by distracting and attempting to stop the terrorists.

“He placed himself in danger and was aware of the possibility of serious personal injury.”