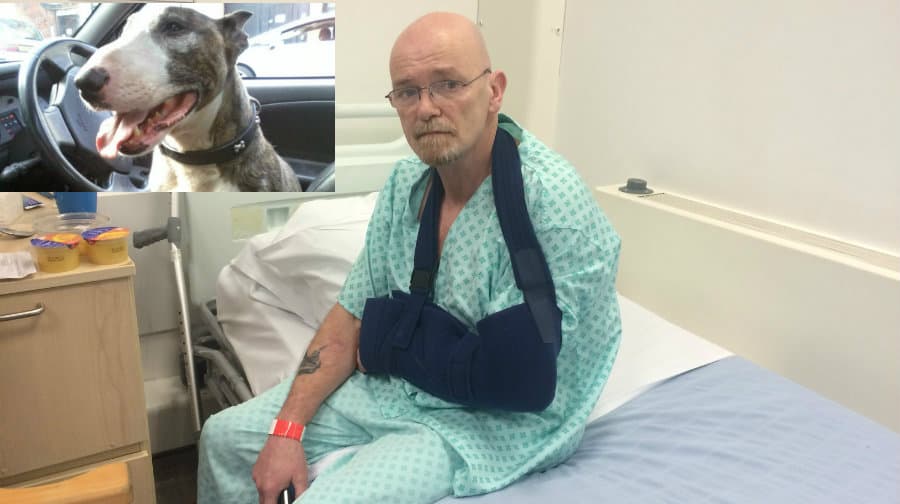 Brave Bosch, inset, saved Noel Dalton from a fire when he pulled his blanket off as smoke filled their Camberwell flat in the early hours

A brave dog who saved his minder from a suspected arson attack by pulling the blanket off him as he slept is feared dead, as he has not been seen since the Camberwell inferno.

Noel Dalton was forced to throw himself 30 feet from his bedroom window when fire engulfed his home in Northlands Street on February 28.

He was minding Bosch, an English bull terrier, for a friend who was ill in hospital when smoke began to fill his flat in the three-floor shared building in the early hours.

The 57-year-old chef told the News: “He pulled the blanket off me and was running around the room. It took me a second to realise what was happening but then I saw the room was full of smoke and I started coughing.

“I went to the front door to the flat but it was boiling hot and I realised there was fire behind it. I tried to turn the light on but it didn’t work, it was completely black. I couldn’t see where I was going and could feel myself starting to go. I managed to make my way back into my bedroom and went to the window.”

The property in Northlands Street was badly damaged by the blaze

Neighbours spotted Noel at the window and urged him to jump. By this point, fourteen-year-old Bosch had disappeared in the darkness and chaos of the flat, which was left “almost entirely damaged” according to a fire brigade spokesperson.

Noel said: “I wanted to throw him to someone but I couldn’t find him. I looked out and the window of the room beside mine just exploded with fire. I thought that was it, that was me done for. People on the ground were shouting ‘you need to jump now.’”

Brave Bosch, who woke Noel just in time to make it to safety

He jumped to the cement floor from the second-storey window, dislocating his shoulder but amazingly survived the fire and fall with no long-term injuries. The real miracle, he said, was being woken up by the brave pooch.

He said: “He saved me, he really did. I want to make that clear. I would be dead if it wasn’t for him. I’m worried about him, he couldn’t have got out of the flat because the door was closed and he didn’t come out the window.

“He is a great dog, very playful. There is a photo of him wearing my trilby hat. It’s not a nice thought, him lying there. Even if he is dead, it’s not nice that he’s lying there.”

Bosch, aged 14, has not been seen since Noel’s Northlands Street flat was bordered up following the devastating fire

A spokesperson for London Fire Brigade told the News that firefighters had not reported finding a dog following the fire, which broke out at 4.30am and was brought under control by 8.50am.

In total five people were hospitalised in the incident, due to “fall-related injuries” or by cutting themselves on glass. A week and a half later, only Noel remains in hospital, waiting for the council to arrange temporary accommodation for him.

He said: “I’ve lost everything. A homeless charity donated some clothes and my boss did a collection and got me some stuff but I don’t have anything now.

“I can’t work now with my shoulder like this, so I am in real financial trouble.”

Police are currently investigating the blaze, which they are treating as arson. One man, aged in his forties, has been arrested in connection with this incident. He has been bailed without charge, and enquiries continue.

The damaged ground floor of the Northlands Street building