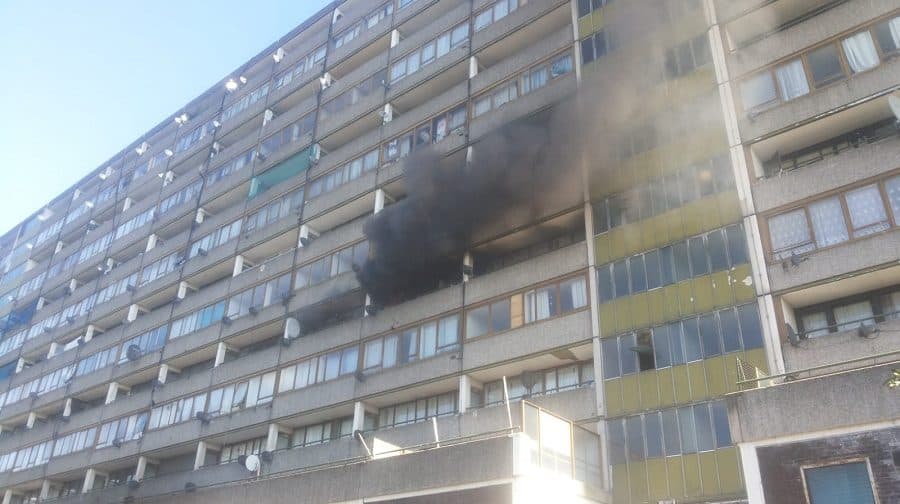 A food bank volunteer raced into danger and rescued a family from their burning Aylesbury Estate flat after a fire broke out in Wendover Block on Monday morning.

Forty firefighters and six engines rushed to the blaze at 10.42am on Monday, September 24, which saw plumes of smoke billowing from the fifth-floor.

Mike Briscoe, aged 51, who volunteers at the Divine Rescue foodbank at Thurlow Lodge told the News he was standing outside in the forecourt on the grass area with his fellow volunteer and friend, Harry, when the fire started.

“We were on the grass having a chat when we looked up and saw this billowing smoke coming from out of the flats.

“There were more and more smoke and flames – and then the screaming started.

“It only took a moment of screaming and Harry went straight upstairs as I rang 999.”

Mike says he was the first person to speak to operators, and that crews arrived within ten minutes.

He continued: “I myself ran into the building and saw smoke coming down the stairs and just managed to get up the first few when I could hear crackling of the fire.

“Harry had to kick the door down to get them out – and even though he is asthmatic he went upstairs again to check everyone was out.

“By the time he came back down he was covered in soot and had difficulty breathing.

“The ambulance and the brigade came and said he should get an award – but he told them he didn’t do it for that.

“I’m so proud of him for doing what he did.

“I do not think they could have got out if he had not been there.” The London Fire Brigade said a woman and her two children escaped from the flat unharmed and were waiting outside on Thurlow Street as fire fighters arrived.

They were treated at the scene by paramedics from the London Ambulance Service, and the fire – which broke out in a split-level flat on the fourth and fifth floors – was contained by 11.22am.

A statement from the London Fire Brigade confirmed the incident and said that they had received sixteen calls about the fire.

“The cause of the fire is under investigation.”

As the News reported last month, Southwark Council is seeking to reassure tower block residents that a rolling programme of ‘above and beyond’ fire risk assessments is still taking place after published council papers incorrectly claimed type 4 assessments – the highest level possible – had taken place on all Southwark’s 174 high rises, when the true figure is just eight.

The council subsequently apologised for the ‘drafting error’, confirming the work ‘does and will take time’, with these extra assessments scheduled to coincide with planned major works where possible to minimise disruption.