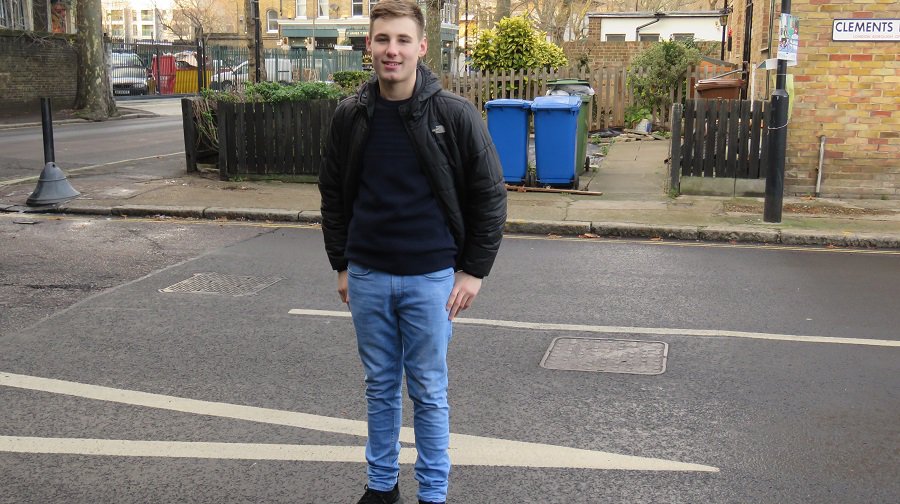 James Pocknell, 14, rushed to put a youngster in the recovery position after he collided with a car

A teenager who had just learnt the recovery position put his new skills to the test after rushing to help a young crash victim.

Quick-thinking James Pocknell sprang into action after a car and a schoolboy collided on Clements Road, in Bermondsey, last Thursday, December 7.

The fourteen-year-old Bacon’s College student raced over to the injured youngster and placed him in the recovery position before signalling for someone to call an ambulance.

Recalling the events, the Bermondsey teenager told the News: “I heard a loud bang like when cars crash and my girlfriend said ‘look James’ so I turned around and he was on the floor in the middle of the road.

“I ran over and I panicked a bit. I froze for a second, I was scared for him, and then I thought of the recovery position, so I pulled his leg up to the side and put his arm to the side.

“At first I couldn’t see if he was breathing, but then I could see his chest moving.

“Then a lady ran over and said she was first aid trained, so I stood back and told [someone to] ‘call an ambulance’ and waited until the ambulance came.”

James, the eldest of three children, said he had recently received some training from London Fire Brigade through his school and one of the things he was taught was the recovery position.

“I felt proud of myself because I know what I did was good,” he said.

His mum, 36-year-old Tulay Gray, said his family were “very proud” of his actions.

“I cried when he rang me and told me what happened,” she said. “It was the proudest moment you could imagine.”

She added that James had been concerned about whether the schoolboy had recovered.

Police were called to reports of a collision involving a car and pedestrian on Clements Road, near the junction with St James’ Road, shortly before 5pm on December 7.

The pedestrian was taken to hospital by ambulance after suffering cuts and bruises and a serious head injury.

He was treated in a paediatric intensive care unit but his injuries were not thought to be life threatening.

He was said to be in a stable condition, but it is known whether he has been discharged from hospital.