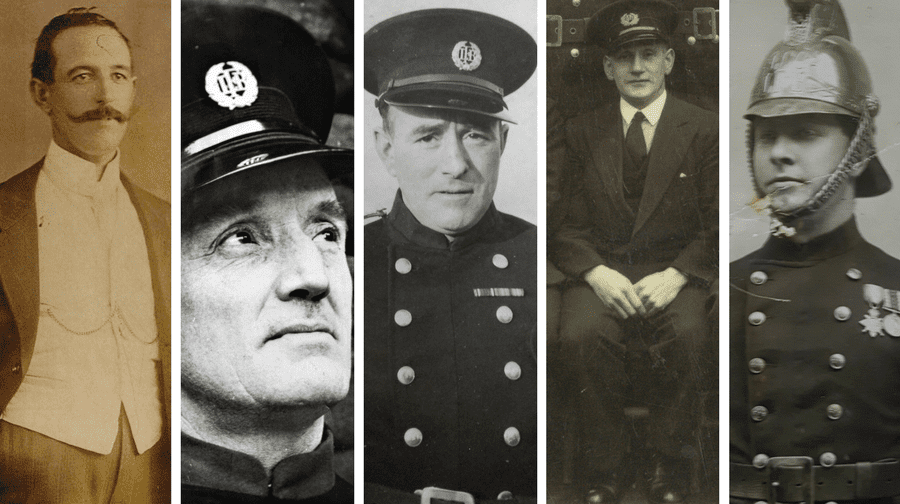 The dramatic stories of eight men who risked their lives to rescue dozens of people from a fire-ravaged South Wharf during the Blitz have been revealed.

A prime target was Surrey Docks, which was reduced to an inferno as fires spread through its timber yards.

South Wharf smallpox receiving station, now the site of Surrey Docks Farm, was caught up in the devastation.

As part of the farm’s Piecing Together Our Past project, funded through the Heritage Lottery Fund, the details of what happened that night have been encapsulated in an information board and mural at the site.

Spectacularly, not a single life was lost at South Wharf that night, despite the raging fire, thanks to the brave actions of eight men who were later recommended for gallantry awards.

There were eleven staff at the smallpox receiving station that day – however no patients were there at the time.

The first air raid began at about 5pm and it wasn’t long before South Wharf was encircled by flames.

The fire brigade had already begun evacuating residents from the surrounding area via the wharf onto a boat at the end of the pier.

The nurses ran down the burning pier and onto the boat, in which the police took them across the river to safety at Millwall Dock.

It was then the boat got into difficulty after a rope became tangled around its propeller.

One of the auxiliary firemen (civilians trained to help with firefighting during the war) Nathaniel Barnes, then 50, plunged into the water to free the propeller. He was later recommended for a Commendation and although it wasn’t granted, his colleagues spoke highly of his selfless actions.

Meanwhile, auxiliary fireman Frederick Meeks, 26, was at Commercial Pier Wharf when he heard there were nurses stranded at South Wharf.

He attempted single-handedly to steer a small rowing boat along the river, avoiding dozens of barges drifting uncontrolled after having their ropes burnt through and with half of them on fire.

The tide carried him away but he was picked up by a fireboat and he continued fighting through the day and night. He was awarded a Commendation for his efforts.

As the fire engulfed the area and cut off roads, more residents headed to South Wharf and took shelter from the flames on an empty barge along with some auxiliaries.

Firemen Richard Ashton, 47, and James Bowtell, 43, came alongside in a fireboat and towed the barge of about 50 people away to safety at Nelson Dry Dock while bombing continued overhead.

It required a tremendous amount of skill and Ashton, who was in charge of the fireboat, was awarded the British Empire Medal, while Bowtell was awarded a Commendation.

Two firefighters – Timothy Muir, 43, and Samuel Melvin, 44 – rescued Sister Hope, the Matron in charge of the receiving station, who was forced to take refuge in a shed after the pier collapsed, leaving her stranded.

The pair took the risk of going back for her and attempted to drive her to safety but their fire vehicle plunged into a water-filled bomb crater.

They lifted her out and into another car nearby but it failed to start. After a frantic search they found an empty taxi and drove it out of the inferno to safety. They were both awarded the George Medal for risking their lives.

William Petley, a 59-year-old general mechanic employed at the receiving station who lived onsite, played a major part in fighting the blaze right from the start and was awarded the British Empire Medal.

Harold Barrett, 43, who was in charge of the crew that evacuated staff and residents and transported them across the river, was awarded a Commendation.

Relatives of the men travelled to an event at Surrey Docks Farm to hear about their bravery. David Reidy, the grandson of Richard Ashton, who had eleven children, organised for 25 relatives spanning four generations to be at the event.

He had already researched into his grandfather’s history but said there was little information about why he was awarded the British Empire Medal in his commendation letter.

“The whole family found it quite an emotional day, if I’m honest,” said the 59-year-old.

“Even some of them in the generation below me who currently work on the river and have been in the fire service weren’t aware of this, so we found it quite emotional and one of his daughters shed a few tears.

“He [Ashton] did talk about it a bit but not a lot because he wasn’t that sort of person, and he had been in the Navy before that in WWI.

“One of my cousins was a fireman and retired about five years ago and one of my cousins’ husbands was with the fire service for 27 years and he was quite tearful – because in those days the uniform was barely anything so they realised how much more difficult it would have been.”