The new exhibition, at the Jamyang Buddhist centre on Renfrew Road in Kennington, is made up of paintings and prints on tin. 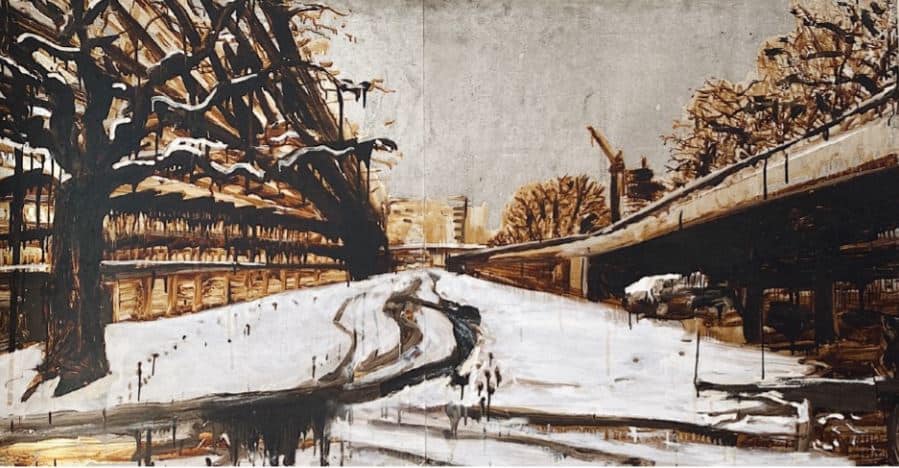 A new exhibition has launched celebrating memories of the former Heygate Estate.

The Heygate Garden exhibition, by Elephant and Castle-based artist Reuben Powell, “focuses on the fast-changing landscape of [the] local neighbourhood, the disappearance of the old and emergence of the new.”

Built as social housing in the 1970s in Walworth, the Heygate Estate was finally demolished in 2014 after gaining a reputation for violence and squalor. But it was originally designed as a futuristic development that would change the lives of its inhabitants, many of whom had lived in overcrowded tenements in the area.

The estate’s raised walkways allowed people to walk quite long distances without touching the ground – and it was rumoured that the architects’ original intention was to let people walk all the way to Camberwell just on these ‘streets in the sky’.

Artist Mr Powell said: “The Heygate was the first thing I saw when I came to the Elephant in the 1980s; as you came under the railway at the top of the Walworth Road it was there in front of you, unmissable. It was a very important part of the local neighbourhood for many reasons, most importantly of course as people’s homes.

“I worked with local primary school children as well on projects where they recorded the demolition of the estate. Recording the Heygate Estate was important for many reasons; its demolition signifies a major change in the neighbourhood. My work is very much a starting point for this discussion with no clear meaning intended.”

The new exhibition, at the Jamyang Buddhist centre on Renfrew Road in Kennington, is made up of paintings and prints on tin. Mr Powell said he used the material in reference to the urban decay he depicts.

He added: “There are echoes of JMW Turner’s works of the River Thames (another of Reuben’s favourite subjects) and the distressed landscapes of Anselm Kiefer.

“The reflective surface and use of rust has the effect of increasing the depth of the picture plane and defies the viewer to find a single viewpoint; the work changing dependent on viewers
place in the room and the light of the day.”

He added: “My first works of the local area were very large scale black and white drawings. They were tense and anxious pieces of work reflecting my own anxieties and the feelings that came with the first steps to change the neighbourhood.

“The paintings here I think have a sense of hope, there’s light. The title Heygate Garden was a reference to the different ways the estate was seen and experienced by different people. The optimism in these pictures is of course overshadowed by the knowledge that these buildings were soon to disappear.”

The exhibition is on at Jamyang Buddhist Centre, 43 Renfrew Road, SE11 4NA. It is the first in a series of exhibitions of work by local artists to be put on at the centre.