"There was a lot more anxiety and nerves around the country, but I think our girls have outdone themselves," said head teacher 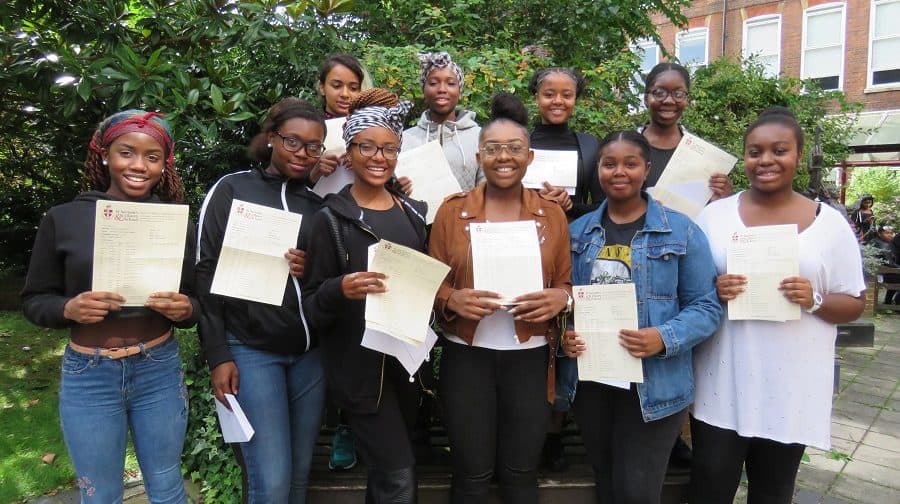 St Saviour’s and St Olave’s head teacher, Catherine May, told the News her school had 9s in all three subjects, and more than double the national average number of grade 9s. And its provisional figure for 4+ [or C+] was 85 per cent.

Catherine said: “I’m absolutely thrilled for the girls and the staff because we have all worked really hard. With the changes to the exams and the numbering, these grades have never been awarded in this way before, which made things much more difficult. There was a lot more anxiety and nerves around the country, but I think our girls have outdone themselves.”

Esther Akinyele bagged 9s in English Literature and Maths, an A in English Language, and A*s in all her other subjects.

She said: “I’m very surprised. I was really scared and never expect to do well in exams and I was struggling before. And last night I was having really weird dreams.

“I want to do Biology, Chemistry, Maths and Further Maths at A-level, and I want to go to university. I called my parents straight away and they said they were proud of me.”

Sharon Amukamara from Nunhead had a 9 in English Literature, 8s in Maths and English Language, and A*s in History, Biology, Physics, Religious Studies, and Chemistry, whilst her lowest mark was only an A in German.

“English was the subject I had the most problems with, so the 9 really shocked me,” she said. “It was so much work and I kept getting the same grades in all the practices, so I was becoming very frustrated. I want to give a shout out to Mr Clayton, Ms Sanders and Ms Vasey and both my old and new Chemistry teachers.”

Sharon has picked Biology, Chemistry, Maths and Economics for her A-levels and hopes to go into pharmacy or medicine after university.

Deborah Okyere, from Borough, got a grade 9 in Maths, two grade 8s in English Literature and Language, three A*s in History, Physics and Religious Studies, and two As and a B.

She said: “I didn’t believe the 9 in Maths when I first saw it – I thought I wasn’t reading it properly. And I thought I would fail Science. I had a dream that I got three Bs.

“At A-level I want to take on History and Maths and Economics & Sociology, and I want to do Law when I go to university, so I won’t even need Maths.

“I want to thank Ms Vasey, my Maths teacher, she was really good. We kind of gave her a bit of trouble at the start of the year because she was new, but she’s also leaving.”

Peckham girl Jade Peake smashed her Maths and English Language exams by getting a grade 9 in both. Then she had A*s in History, French, Biology, Chemistry, Physics and Religious Studies, and a grade 7 in English Literature.

For A-levels, she picked Maths, Psychology, French and Economics.