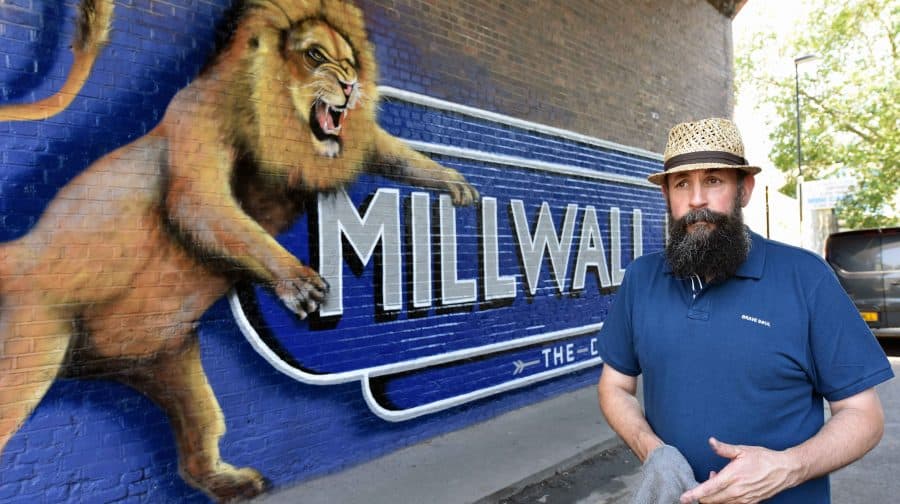 When Millwall fans eventually return to The Den they will have new artwork to enjoy on Zampa Road thanks to a Hollywood artist, writes Kit Heren…

Supporters were left puzzled when the ironic mural of Neil Harris under the railway bridge disappeared in early April.

It emerged it had been mistakenly painted over by Network Rail and Sussex’s graffiti removals team. Now, after consultation between Millwall, the Supporter’s Club and Network Rail Kent and Sussex, one part of the artwork has been completed.

Street artist Lionel Stanhope, who has worked on sets for the TV show Black Mirror and Hollywood films, painted a large lion next to the club’s name.

Millwall have been nicknamed the Lions since the turn of the 20th century, when a newspaper called them Lions of the South for knocking league leaders Aston Villa out of the FA Cup. The new mural is in blue and white, Millwall’s colours throughout their history.

The new mural is just one of several artworks Mr Stanhope has helped make with Network Rail on railway arches across London. He said:“I’m really happy to have worked with Network Rail and Millwall Football Club on this mural and I’m pleased with the outcome. It sits well on the wall with strong colours and I’ve received positive feedback from people walking past.”

Steve Kavanagh, Millwall chief executive, said: “I’d like to thank everyone involved at Network Rail for assisting with this project and we’re also incredibly grateful for the efforts of Lionel, who has done a superb job with the new mural.

“I’d like to extend our thanks to members of Millwall Supporters’ Club who have overseen an initiative organised by the fans, for the fans.” Eddie Burton, community engagement manager at Network Rail, said: “It’s great to see this wall looking so good and I’m really pleased we could do this for Millwall Football Club. We hope the fans and local community will treasure this artwork and the mural will offer a great photo opportunity for years to come.”

Millwall fans seem to appreciate the club’s new mural too. One supporter tweeted: “Thought it looked good in the photos, but even better when you see it in the flesh!”

@MillwallFC may be up north, so thought I’d take the boys along to see the mural by @lionel_stanhope.

Thought it looked good in the photos, but even better when you see it in the flesh! pic.twitter.com/vuYggTFFny

Lionel Stanhope has history with football-based art. Earlier this year, he painted a mural of Ian Wright on a wall in Brockley, the south-east London area where the Arsenal and England star grew up.

And what’s more a new mural of former manager Neil Harris, the Lions record goalscorer could also be completed in Zampa Road this week