A man suspected of dealing heroin and crack cocaine was arrested 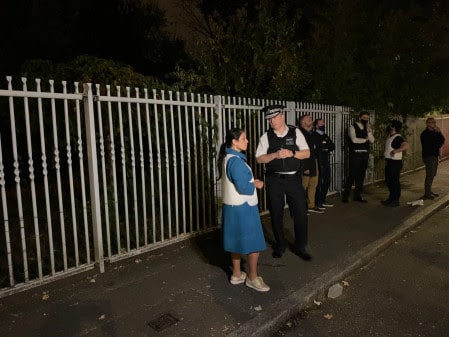 The Home Secretary accompanied Met Police and Sussex Police officers in raid on a property in Brighton Terrace in Brixton in the early hours of this morning (Wednesday September 16).

Police arrested a man suspected of running a heroin and crack cocaine dealing operation in Sussex from London.

Police say their search at the address is ongoing but have confiscated a phone they ‘believe to be used to control a County Line and a quantity of suspected Class A drugs’. Met Police Detective Chief Inspector Ant Jones said: “Every single day officers from the Met are working hand in glove with colleagues from other police forces to arrest those involved in running county lines routes from the capital into the counties.

“Operations like this have been so successful through the strong relationships between forces who are equally committed to stopping County Lines routes. Through this approach we are able to disrupt and dismantle these lines from the centre and protect the vulnerable children and adults who are often coerced into running substances across the UK on behalf of these networks.

“This collaborative approach has enabled us to target and arrest County Lines criminals more than ever before. This activity will increase and intensify in the coming weeks as we continue to bring those responsible for this criminality to justice.”

Detective Chief Inspector Will Rolls of Sussex Police said: ”This is another example of the way we and other forces are working together with the Met and in our own communities, to target and disrupt dealers. We work relentlessly to target, investigate, arrest and prosecute drug dealers who cause harm in our local communities and exploit children and vulnerable adults.

“Police activity is only one part of the solution, we need to reduce the demand, prevent our children and young people being drawn into using drugs and support those addicted to these lethal substances. We are working collaboratively with partners from local authorities, charities, substance misuse use services, and schools to protect the public across Sussex.”

Home Secretary Priti Patel, who joined police at this morning’s operation, said: “I have made rolling up county lines drugs gangs an absolute priority. We have provided police with £25 million to tackle this exploitative trade, and I have today seen first-hand the impact of that investment.

“The police will continue having my full support in the fight to keep the public safe.”