The money was raised through donations, a charity sleep-out and a fun day. 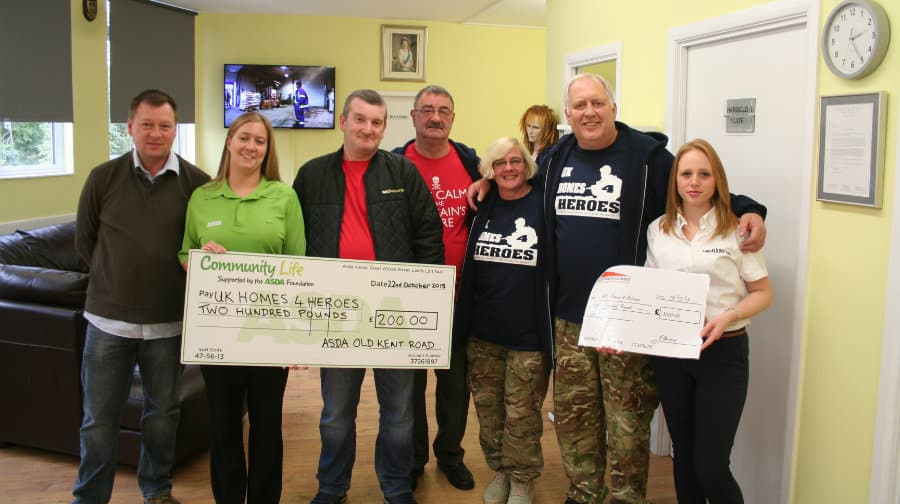 Jimmy Jukes and Michelle Thorpe along with representatives from A&E Elkins, Asda, and other fundraisers.

The co-founder of a Rotherhithe charity thanked supporters for their hard work in raising over £5000 through a variety of stunts last week.

Michelle Thorpe, the co-founder of Homes 4 Heroes UK, told the News she was blown away by the fundraising work when she received the donations at the homeless ex-forces charity’s Cope Street headquarters on October 22.

One of the fundraising stunts was a 24-hour “sleep out”, which saw a dozen or so supporters spend a night sleeping rough in front of 10 Downing Street.

Roger, an ex-member of the Territorial Army, said: “People really were moved and donated very generously. It showed the strength of feeling for homeless veterans. It’s sad that we have to do this to raise awareness but it is all worth it if it can help out Homes 4 Heroes and the work they do.”

In total they raised around £3000, a figure matched by A&E Elkins, who organised a fun day last month, with a portion of the proceedings going towards the charity.  Ayesha Wright, the company’s resident liaison officer, said: “It is something we feel passionate about. We’re not just here because the council asked us to, we want to help and become a part of the local community.”

A&E Elkins were also an integral part in the construction of the charity’s base in Rotherhithe, carrying out thousands of pounds of work for free.

Finally, the charity also benefited from a £300 donation from customers at the Old Kent Road branch of Asda.

The supermarket asks its customers to vote on which local charity to help out, and Homes 4 Heroes was the clear winner last time around.

Michelle Thorpe, who is also the Pearly Queen of Rotherhithe, said: “It’s just so nice to see so many people coming together to help out. We can’t thank them enough.”

To find out more about Homes 4 Heroes, visit their website at www.ukhomes4heroes.com or pop into their care centre above the Surdoc Club in Cope Street.

Jimmy, Michelle and fundraisers during the sleep out.