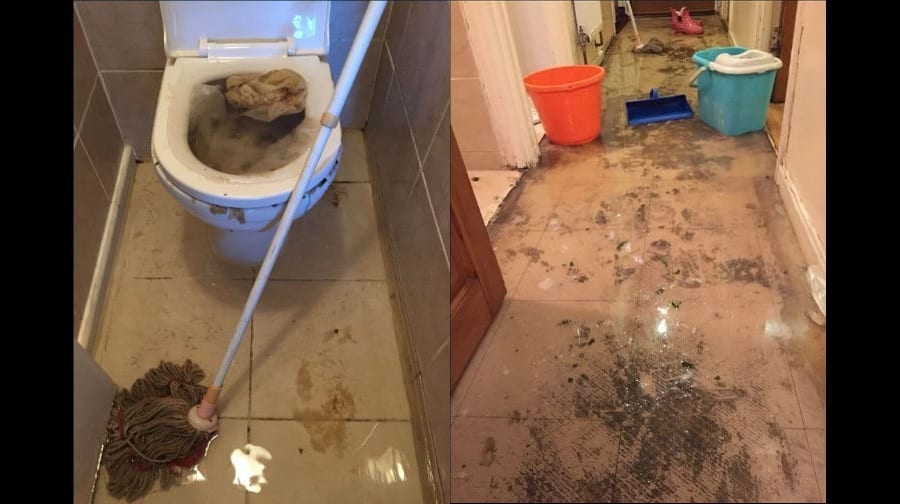 A Rotherhithe resident filled “fourteen buckets” of sewage in just one hour on July 4 as it poured out of the drains and leaked through the ceiling and walls in her flat.

Four flats of Regina Point on the Canada Estate were filled with sewage due to a soft-drink bottle clogging up an important pipe, forcing faeces, urine and dirty toilet roll to be pushed out.

Horrified residents called Southwark Council’s emergency call centre late at night as the flooding begun, but were told to “put a bucket underneath it” and that they “couldn’t do anything at night due to health and safety”.

Candice Copley, one of those affected, told the News how she became increasingly frustrated with the call centre as she tried to stop more damage being done.

She said: “My main issue was with Southwark Council’s call centre. All they kept saying was “you’re just repeating yourself” and “put a bucket” underneath the leak.

“One of the people I spoke to went home before it was resolved. I work in customer relations and that’s appalling.

“They told me they could send an assessor afterwards to fill out a form to see what they could help us with.

“I got rid of fourteen buckets in just one hour.”

@lb_southwark I live 2 floors down from @zhong_du the way we are currenly living is disgusting… It's a sham pic.twitter.com/BvgG9rU0eR

Candice’s mother, Edna, claimed that one resident “had to use an umbrella when she went for a wee” due to the leaks.

It was only when Barry Duckett, chairman of the Canada Estate Tenants and Residents Association, called builders Keepmoat for assistance, that the leaks were stopped.

Barry said: “I have done more than Southwark in this instance. Southwark have been absolutely disgusting and I am fed up with them.

“When there’s sewage in your house you should have Environmental Health in. These people have lost their houses. This is not good enough from Southwark Council.

Councillor Stephanie Cryan, Southwark Council’s Cabinet Member for Housing, said: “Southwark Council’s repairs teams have been on site since they were called out and have both resolved the blockage and are dealing with any resulting issues, including checking electrical safety and cleaning up where needed.  We’re very sorry for any inconvenience this has caused.”