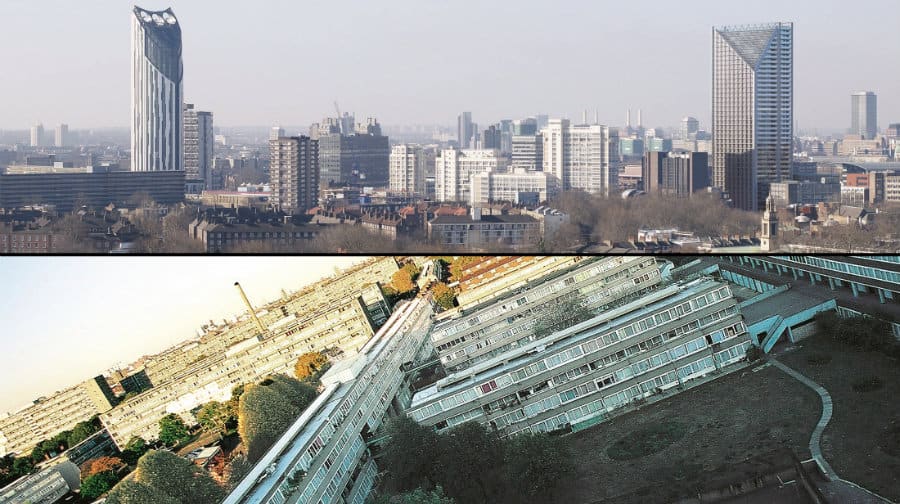 The Aylesbury, below, with Eileen House, above, which is yet to be completed

A council policy that could be a breakthrough in the battle for more affordable housing built in the borough has been rubbished by “disappointed” campaigners.

Adrian Glasspool and Jerry Flynn, two former Heygate Estate residents who carry out investigations under the 35% blog, have identified a “loophole” in the policy that they think may allow developers to get around rules on being open about how much affordable housing they will provide.

The policy, which was approved by senior councillors on March 15, is designed to make deals for getting decent amounts of social and affordable-rent housing out of developers more transparent. It does this by forcing developers to publish ‘viability schemes’ that show how many social or affordable-rented homes they can offer before a development becomes unprofitable.

Pressure from Jerry and Adrian’s campaign had helped convince Southwark Council leader Peter John to promise to take this issue on, and previously say to the News that more “openness” is needed, so people can “pore all over these documents”.

But Jerry told the News the new policy was a “missed opportunity” for real transparency.

The campaigners fear the policy will give developers the freedom to privately change deals made on affordable and social-rented housing quotas after the council has signed them off, because it “skips over” what would happen if an appeal is made.

“It would be very simple for them [the council] to just put a line in the policy making it explicit that they have to provide viability schemes when they want to alter the amount of affordable housing,” he said.

“It feels like the council are making trouble for themselves by not making it clear. If I was a developer I would just say ‘show me where it says I have to do another one [viability scheme].”

Cabinet member for regeneration and new homes, Mark Williams, said the policy “includes” scenarios when a developer tries to reduce the level of affordable housing, while a council spokeswoman said the policy’s documents state this “implicitly”.

Southwark’s Liberal Democrat spokesperson for Planning, Cllr Adele Morris, said: “Until the council understands that development should be done ‘with’ residents and not ‘to’ them, they will continue to have serious problems with deals being done behind closed doors.”