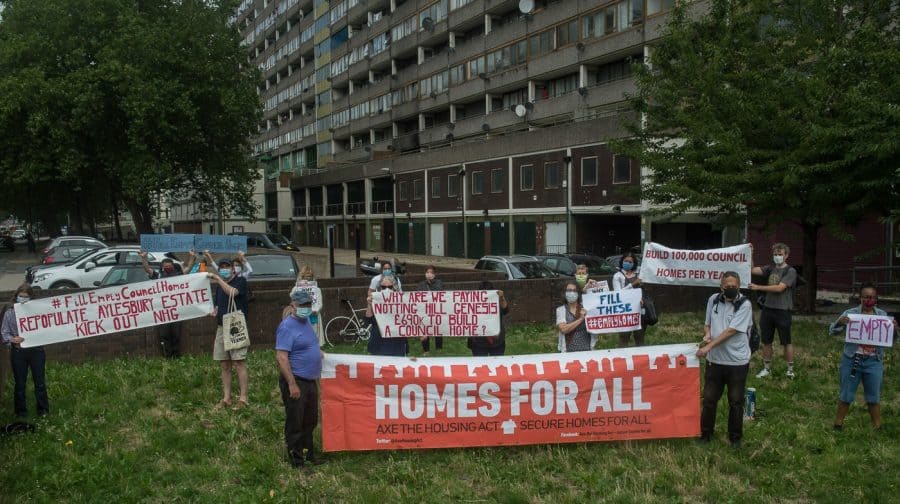 Southwark Council’s new homes chief has refuted claims Tooley Street has been forced to ‘bail out’ its Aylesbury regeneration partner.

As the News reported last week, the council has struck a deal with Notting Hill Genesis to stump up £193 million to buy 280 homes planned for ‘package A’ site – due to be completed in March 2012 – for social housing.  Under previous agreements these would have been sold privately or let for ‘intermediate’ rent.

Changes to the house building borrowing cap, funding from City Hall, and an acknowledgement that “we cannot return to business as usual when this pandemic is over” are all cited as factors that have enabled the council to plough in extra funding.

Although the boost to council housing on the footprint of the estate has been welcomed, campaigners argue the huge cost is ultimately a good deal for Notting Hill Genesis and a controversial one for a local authority with a strained public purse.

More than 20 campaigners gathered at the estate on Saturday, July 18, arguing Notting Hill Genesis is being bailed out after looking ‘increasingly unlikely to finish the job’. They cited a figure of £210 million which has been disputed by the council – apparently including a land receipt that has now been waived.

The 35% campaign, which lobbies for genuinely affordable housing, has also highlighted the immense cost of the deal. “Getting 581 new council homes on the Aylesbury is good news to everyone who depends upon council housing for a decent home,” said Jerry Flynn, a representative from the group.

“It will also give Aylesbury residents a better chance of staying on a regenerated estate.  But there is an obvious question now about Notting Hill Genesis – if they cannot deliver the first phase of the remaining redevelopment, can they deliver the rest?”

The council says claims of a ‘bail out’ is inaccurate; arguing that work had already started on site before the agreement was reached.

According to provisional plans, it is expected that around £54.4 million of the cost will be funded by Greater London Authority funding, with the council’s own share amounting to £138.5 million, and equating to roughly £238,000 per home, if funding is secured. If not, the figure would be far higher.

The homes’ rental yield will be reinvested in the borough – another benefit in comparison to housing association rents which are not guaranteed to be kept within Southwark.

Cllr Leo Pollak, cabinet member for social regeneration, new homes and great estates, told the News: “The council’s investment in the Aylesbury estate will now not only provide 581 brand new council homes for existing residents to move to, but speeds up the development of new homes for residents who are currently living in properties that are, despite our investments, now past their natural life span and subject to numerous design flaws and heating issues.

“As the council’s priority is the provision of new housing, not profit, and the costs per new home work out at roughly the same as our direct delivery of council housing, this a good solution all round for the council and most importantly the Aylesbury Estate residents.”

Notting Hill Genesis batted away claims it was unlikely to complete the project, with a spokesperson told the News yesterday: “We have worked closely with Southwark Council throughout the project and were happy to discuss their plans to increase the provision of council housing while also making it easier for residents in latter phases to move more quickly while remaining in the neighbourhood. This still needs to be taken to the NHG board later this month.

“While the council homes would make up two-thirds of the first development site, it is only a small part of our overall regeneration of the area.

“We remain completely committed to our long-term plans and look forward to welcoming the first Notting Hill Genesis residents to new homes on future phases.”