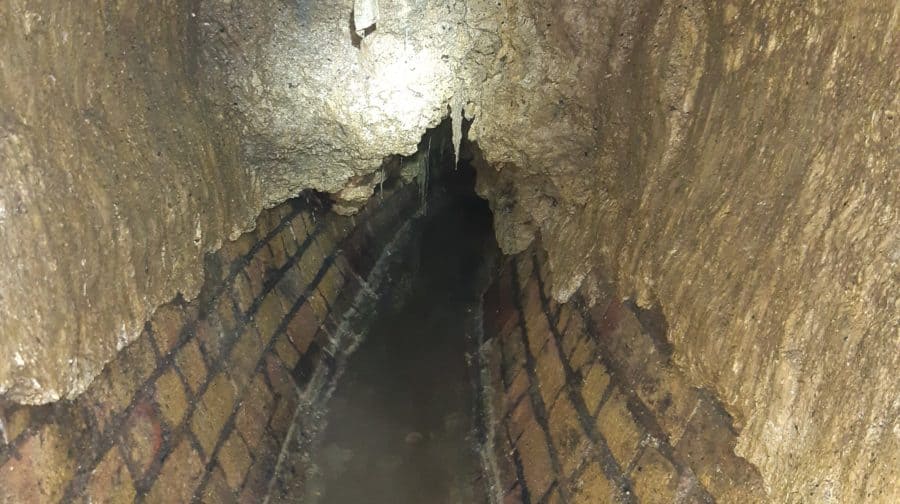 The fatberg, discovered on Cathedral Street underneath Borough Market

A mammoth 30-tonne fatberg has been removed from the sewers underneath Borough Market.

The rancid lump, stretching to 70 metres, was removed by Thames Water ahead of Christmas – and the body says it’s a reminder not to flush fat down the drain at Christmas.

Another ‘sewer beast’, made of cooking fat, wet wipes and sanitary products, was removed from a Pall Mall sewer weighing a disgusting 63 tonnes.

“Fatbergs are like monsters from the deep, lurking and growing under our feet, and the team worked around the clock to defeat these two before they could cause damage to our customers or the environment,” said Stephen Pattenden, of Thames Water. Engineers say the smell is disgusting in the dark cramped sewers

Unlucky engineers from Thames Water had to use power tools to break up one of the fatbergs and carry it out by hand, as it contained concrete.

The smell “can be overpowering,” said Mr Pattenden.

“It’s an extremely difficult job getting them out of our sewers. It’s cramped, hot and very unpleasant, especially when a chunk of fatberg is disturbed,” he added.

Thames Water has launched a campaign to remind people not to flush foodstuffs down the drain which causes the fatbergs.

Every year it has to deal with 75,000 blockages across its network, costing £18million.

It comes months after a 100 metre ‘Concreteberg’ was removed from underneath Islington, while a 40-tonne fatberg was also cleared from a Greenwich sewer last month.

In late 2017, Thames Water got rid of a mammoth 130 tonne Whitechapel fatberg.

Instead of putting oils and fats down the sink, experts recommend letting it cool before putting it into a container and then placing it into the bin.