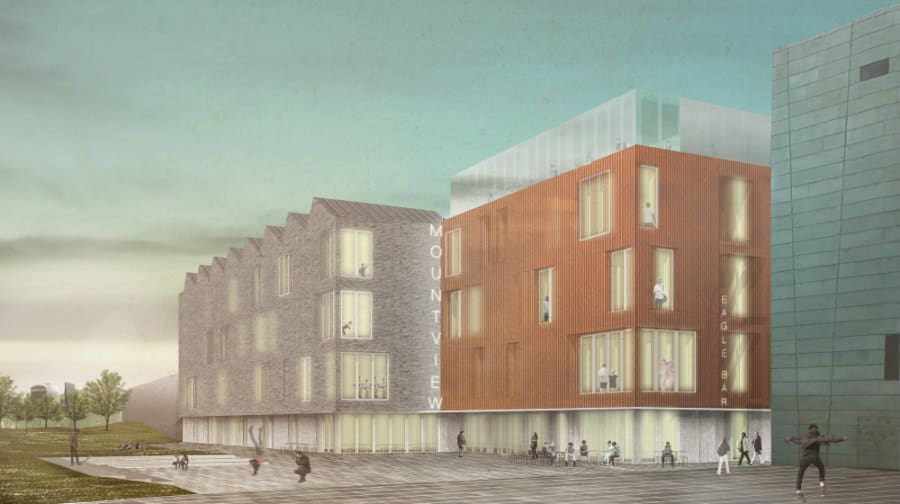 The creation of a huge new performing arts university in Peckham was given unanimous approval by Southwark Council’s planning committee on Wednesday.

The prestigious Mountview Academy submitted plans earlier this year to expand from its base in Wood Green to a brown-field site called Eagle Wharf, behind Peckham Library.

The part-three-four-and-five-storey building was designed by Carl Turner Architects. Inside, it will have nineteen TV/dance/acting studios, two television studios, a radio studio, a 200-seat theatre and an 80-seat “black box” studio.

The Academy will offer undergraduate, masters and foundation-level qualifications, and be available for commercial and community use on weekends and holidays.

The plans also included a roof-top public restaurant and bar. Vehicle access would be from Peckham Hill Street.

Mountview’s Chairman, Vikki Heywood CBE, said: “Mountview will be both a dynamic public building and a thriving and diverse training environment.

“World-class facilities will enable our local, national and international students to excel, working with leading industry professionals. We will also welcome thousands of young people and members of the local community to the building each year for classes, events and to enjoy shows.”

A performance by students at the Mountview Academy in Wood Green, north London

Members of the Southwark Conservation Areas Advisory Group had previously raised concerns about the affect the new building might have on the views from Peckham Library towards central London.

A report written by Southwark’s planning team has said the scheme “complies with the guidance in the conservation area appraisal, and does not appear overly dominant in this sensitive historic context”.

The Planning Committee meeting held on September 28 saw all of the Labour and Liberal Democrat councillors vote in favour.

Quite honestly I never had a desire to be an actor. I tell people, I did not choose acting; acting chose me. I never grew up wanting to be an actor. I wanted to play football. In about 9th grade an English teacher told me I had a talent to act. He said I should audition for a performing arts high school so I did on a whim. I got accepted. Here’s my own site for more relevant information. http://woodworkdesigns.netosnipe.com