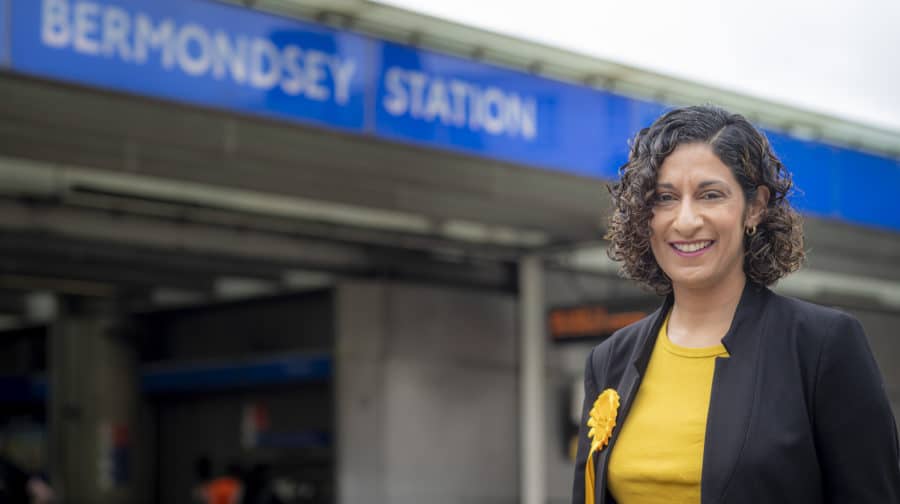 Cllr Humaira Ali, pictured outside Bermondsey station during the general election campaign is backing a voluntary tax to raise funds for the council's services

Born in Lewisham and growing up near Bromley, Ali has been living in Bermondsey for the past decade – and since 2017 has been representing West Bermondsey and London Bridge as a councillor.

She was a late-comer to politics, she says.

“On the TV, I used to see middle-class, upper-class white men sort of bawling at each other across the House of Commons, it just never entered my frame of reference that I could be someone sitting there.”

Ali has enjoyed a career in change management since 2000, a form of consultancy, working with clients across the public sector, private and charities.

It was a friend who got her into politics, she recounts, who had been selected to stand for the party in Lewisham.

With her encouragement, Ali decided to get involved in the Liberal Democrats in Bermondsey.

She challenges the News when asked her age: “Why is age important?” she shoots back.

“We need representation from all walks of society, across all ages, all races, genders, abilities.”

(Ali points out that she is the only woman standing on the ballot paper for Bermondsey and Old Southwark.) The three hot-button issues facing the constituency are housing, crime, and a lack of opportunities for young people, the candidate believes.

Housing is key among them, she says – “it’s has always been the number one issue.” It’s simply too expensive, not enough of it, and sometimes of very poor quality.

“The most fundamental is that people cannot afford homes and we’re seeing the break-up of communities here and it has a knock on impact.

“And that’s a shame because what I love about Bermondsey and why I fell in love with Bermondsey was that sense of community.

“So many of my [ward] residents and people across the constituency who are born-and-bred here say that community is gone now.”

Crime is something else which preoccupies the current local councillor.

In her own ward, she says that they have only one-and-a-half local safer neighbourhood officers when there had been seven or eight.

“If there’s not enough of them to do that then all they’re doing is reacting to an increasing sense of crime.”

Closely linked, she says, is a lack of opportunities for young people. She mentions the Brandon Estate, part of which falls into the constituency. There has been a horrific three murders of teenagers on the estate in the past year.

“We would want to restore funding for local authorities so that we can put money back into youth services. Not necessarily clubs but services that work for young people,” she tells us.

But she takes care to say that Brexit – “the issue of our time” – is a significant barrier to funding for youth services, education, or for green measures.

The party estimates that it would have an extra £10bn a year if Article 50 was revoked.

If it is revoked, we can “start focussing on other things like the key issues in our community like housing, crime, opportunities for young people,” says the candidate.

Ali refuses to accept the idea that voting for Labour would be a vote for Remain – despite opponent Neil Coyle being among the party’s most outspoken Brexit critics.

“We are the only party of Remain,” she insists. “Labour aren’t on a Remain manifesto and if you’re standing for a political party, you stand on that manifesto.

“So irrespective of that [Neil’s position], I would say there’s no such thing as a Labour Remain MP.”

Squeezing the Remain vote could be a winning strategy: Southwark voted 72 per cent to remain in 2016’s Referendum.

But there is still a sizeable minority who voted to leave – over 30,000 Southwark residents. (Not all of whom will live in this particular parliamentary constituency.)

Given that Ali and the Liberal Democrats are billing themselves Remainers-par-excellence, aren’t local Leave voters being ignored, and their vote betrayed?

“Our policy to revoke comes on the back of the Liberal Democrats winning an outright majority,” she says, alleging that “people know they’ve been lied to and betrayed” in 2016.

“If we don’t win an outright majority, we will continue to campaign for a People’s Vote. It’s like when you get offered a job. You’re not going to accept it without seeing the contract.

“Whatever any government of the day has been negotiating is the contract, and surely once that’s been negotiated, the people should have the final say over whether they want that contract or the one they’ve got?”

She denies that it would be a betrayal of Leavers’ votes. “There are people beyond that who insist they still want to leave,” she adds.

“I want them to know that if I’m elected to Parliament I will be the MP for everybody, I’m not selective in who I would be the MP for.” Bermondsey and Old Southwark has previously been held by the Liberal Democrats in the form of Simon Hughes.

The now Chancellor of London South Bank University held the constituency and a predecessor since the infamous Bermondsey by-election of 1983 until 2015.

He was ousted by Labour’s Coyle, who increased his majority at the last election.

Despite telling this paper that some residents have pledged a vote “because they miss Simon,” Ali insists she is not standing as Hughes’s would-be heir.

“Simon is an incredible role model and champion of social justice and I’ll certainly be continuing that work.

“But I’m also the 2019 Liberal Democrat candidate and while we share the same values, I think that the world has moved on considerably.

“Some of the issues he fought for I will continue to fight for because that’s part-and-parcel of liberal values. But I’m not Simon, and I won’t necessarily be doing things his way.”

Among the differences residents would notice as a Liberal Democrat MP, she pledges, is a straight-talking manner.

“I’m going to tell it as it is, and I think people deserve the respect of being given a straight answer.”

But not so straight-talking that she would become disparaging, she promises – calling her manner “collaborative.” She despairs at what she calls the “tribal” nature of modern politics.

“If you’re in the community or the workplace and you’ve got a problem, you don’t divide yourself into two teams, people come round the table around a tea or a pint and they discuss with a diverse range of backgrounds.”

Is this something she thinks is lacking in the seat at the moment? “Listening” she says is something that’s “been a weak point for this constituency.”

“The job of an MP is very hard,” she concedes. She praises Coyle’s work on Universal Credit and benefits.

But it is clear that Ali wants to burnish her green credentials, as she criticises a lack of action on environmental issues such as air pollution as “really out of touch with the majority of the population in Southwark.”

Transport is another area on which she feels Coyle has been weak; and she reserves criticism too for his style.

“I’ve seen Neil being quite scathing to quite a lot of groups of different people, on Twitter he’s quite offensive and insulting to other groups,” she adds.

“Maybe that’s driven out of passion, but actually that’s not how people operate in the modern era.”

We are speaking relatively early on in the campaign. The party has conducted internal polling about their chances in the seat, and Ali remains tight-lipped on what exactly it says.

But it seems she is expecting a tight race. “It’s close. It’s going to be very close,” she says. Just how confident is she that she can overturn Coyle’s solid 13,000 majority?

As a relative newcomer to the political arena, Ali says she expected to have more time to prepare for the election.

“I was selected in the summer and I thought I had two-and-half years to knock on every door in the constituency to introduce myself to people, to reach out,” she says.

“An election has come much sooner than we had expected. But I am very much ready to become the voice of Bermondsey and Old Southwark in Parliament.”

Got to be better than Neil Coyle.

Given the Tories cannot win here and Corbyn cannot win a majority and will be reliant upon a coalition to get in, we might as well send as many Lib Dems as possible to the HoC.