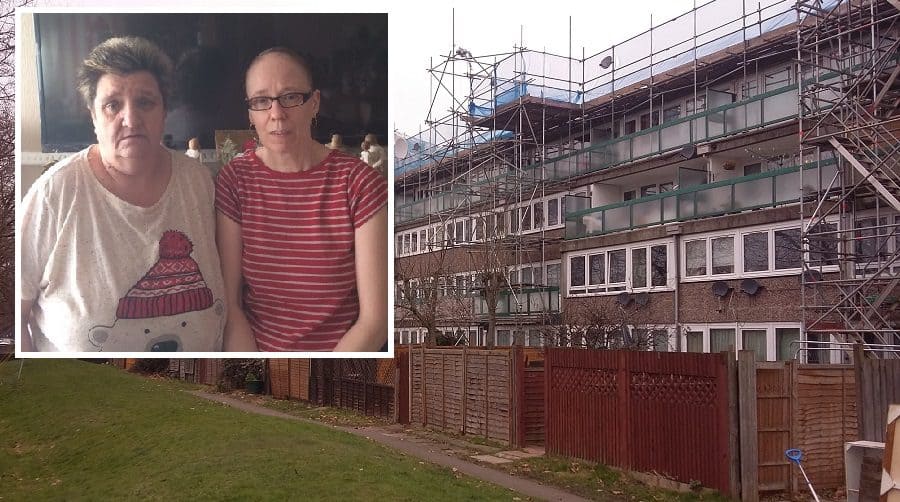 Residents on estates in Walworth who have suffered weeks of on-and-off heating and hot water are demanding refunds from the council.

Three mums from the Aylesbury Estate’s Calverton block have been contacting the News since December to vent their frustration about the ongoing problems. Families at the Salisbury, Woodford and Lulworth estate have also endured cold homes and no hot water.

Calverton residents receive text messages from the council every time it becomes aware of the estate’s heating problems, and to update them when heating is restored.

One mum, Jackie Somerford, showed this newspaper 21 texts she received from eighteen separate occasions when her heating had gone between December and February – including on Christmas Day.

Jackie, 57, said: “We want refunds, just like the council did two years ago when we all complained. They gave us about £150 last time, so they should do it again.

“It wasn’t as bad last year, but this year has been worse than ever. The heating goes off more often than they know from the texts we get.

“I have friends living here that are builders. They come in from a hard day’s work all sweaty and they can’t have a hot shower. It’s disgusting.

“It’s not just here, I know people in Wendover and Danesfield who have had it like us.”

A Salisbury Estate resident told the News that all 270 flats there had had problems “since September”.

“My house is currently 12C, but I’ve seen it go below 9C,” said a woman who didn’t want to be named.

“The council have told us they are going to upgrade the central boiler, and we’ve had a letter saying the pipes are corroded and have scale on them. But there’s elderly people here who are suffering, and we pay for these services.”

Dad of two, Tom Sukhram, said the Lulworth Estate had gone a week without heating or hot water between January 25 and February 1.

“This estate has 52 flats. It’s totally unfair when we’re paying rent and utility costs and you’re not being provided with the service,” said Tom. “People should not be living like this. It’s not right.”

A leaseholder from the Woodford Estate told the News his high-rise block had gone without heating over Christmas due to errors made by council contractors, and had only been fixed on February 3.

Councillor Stephanie Cryan, Southwark Council’s cabinet member for housing, said: “I apologise for the inconvenience and discomfort this is causing residents, they have had repeated problems with their heating and hot water and they are welcome to approach the council and we will consider their requests for compensation on an individual basis.

“Despite recent investment – £4.5m two years ago, and continued maintenance, the district heating system on Aylesbury does sometimes go down and we respond as quickly as we can.

“Across the borough, we have a long-term investment programme for district heating on other, older estates and our borough-wide regeneration programme seeks to permanently improve heating systems.”

Southwark Council’s cabinet members discussed on January 24 how the authority might carry forward a long-term strategy for investing in its estates’ heating systems.

The council provides heating for 17,000 homes across 120 heating networks, in which there are 220 individual boiler houses, according to a report prepared for the meeting.

Cllr Cryan said: “These systems require a large investment to ensure that they are brought up to a modern standard, remain in good working order, and are as efficiently as possible.”

The council has hired consultants Parsons Brinckerhoff to undertake a review of the borough’s heat networks, and assess a strategy for future heating supply on its estates.

The strategy will be devised over the next three years, but it was already suggested that should the investment proposals fully go ahead, it would be worth as much as £350m.

The council report adds that it would be more costly in the long run to continually pay for maintenance of various estates’ current heating systems, than invest in new ones.