The "emotionally powerful" statement was in memory of Esther Hartsilver, who was killed by a lorry while cycling in the area earlier this month. 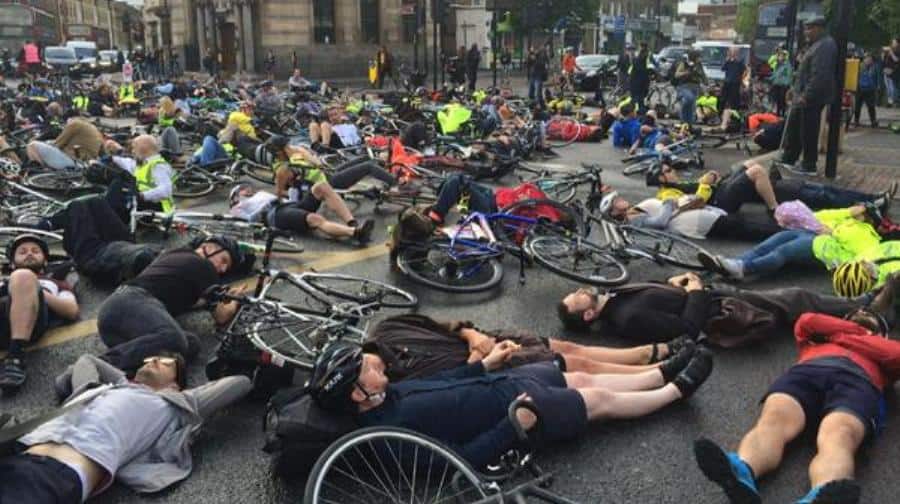 Hundreds of cyclists brought Camberwell Green to a standstill on Monday evening when they staged a ‘die-in’ in memory of Esther Hartsilver, the 32-year-old killed when she was struck by a lorry in Denmark Hill earlier this month.

The “emotionally powerful” protest, which saw campaigners lie down in the junction for around three minutes, aimed to raise awareness for the challenges facing cyclists on London’s roads.

Donnachadh McCarthy, of campaign group Stop Killing Cyclists, said: “It was emotionally powerful and incredibly therapeutic for those involved. A few cars beeped at the start, but once they realised what we were doing they were totally silent and respectful.

“To hear Camberwell Green go completely silent – not an easy thing to do – was amazing. I was shaking. It will send a powerful message to [Council Leader] Peter John and Southwark Council.”

A white ‘ghost bike’ was erected in Ms Hartsilver’s memory, and speeches were made by cycling campaigners, friends and family, including her sister Sally.

Speaking to the crowd, she said: “Esther was a free spirit, she was in the prime of her life. She was a beautiful girl and she’s touched all of our hearts. It’s an absolute tragedy for our family and I would not like anyone else to go through this.

“I was horrified when I went to the junction where she was killed at how busy and how lethal that part of London is. Too much traffic at rush hour and too many big vehicles.”

Ms Hartsilver’s former colleagues at King’s College Hospital, where she worked as a physiotherapist, also attended the memorial.

Cllr Peter John said: “Our sincerest sympathies are with the family and friends of Ms Hartsilver. We want to make cycling safer for everyone in Southwark, which is one of the reasons why we plan to invest millions of pounds in cycling over the next five years.”

He added:?“It is too early to speculate on the events surrounding the tragic death of Ms Hartsilver, but the council is speaking with TfL about a number of changes to the Camberwell network and we will be working with TfL, who we need to agree any decisions.”

Cllr John also reiterated his belief that heavy goods vehicles should be banned from London’s streets during rush-hour.

A separate memorial organised by her running club, Project Awesome, was held for Ms Hartsilver last week. Around 150 people took part in a special run which finished at The Scoop in More London, where songs were played and her name was spelled out in candles.

Would be nice if Southwark News addressed the disgusting comments on this article by some of its followers on Facebook, who seem to think it’s OK for people on bikes to be mown down by trucks.