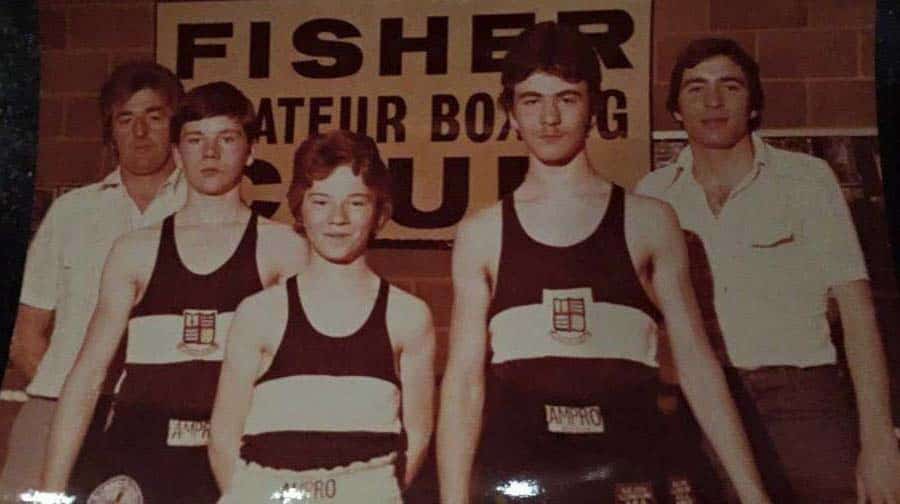 Con (on the left)?with the O’Sullivan brothers, who all boxed for Fisher

Between 300 and 400 people packed out the Holy Trinity Church in Dockhead on Monday, to pay their respects to Con, who had been at the Bermondsey amateur boxing club for almost eight decades.

The News reported last week how Con had passed away from cancer on March 17. A ‘ten bell’ salute honoured the club stalwart at a Fisher fight the following night.

Con first started training at the club as a child, while living with his family in Wolseley Street, and it soon became a central part of his life.

Remembering stories from when her dad grew up during The Blitz, Con’s daughter Joan told the News how he saw a priest walk into Dockhead Church, at the very moment a doodlebug dropped from overhead. “He ran into the building to help rescue the priest,” said Joan. “And I was told dad’s dad rescued the cross from the church.”

Con stuck with the club through teen and adulthood, becoming the match-maker and Fisher competition secretary in the 1970s.

Joan said: “He wouldn’t take money from the club so he did that job. It was his life really.” She remembers every Sunday the family would go to church, “then to nan’s” and then onto the Fisher Club.

The position in the 1970s didn’t just bring him closer to the club he loved, but also some glamour and five minutes of fame.

“Dad was the first person to put on a boxing show at the Savoy,” said Joan. “He was also involved in a programme made by Thames TV, called ‘Tougher than the Average Kid’, which was all about Fisher and another amateur boxing club. They filmed dad for months and it included the big show at the Savoy. They showed him telling staff that the enormous chandelier would have to be taken down.”

Con was also involved in taking boxers to fights in Ireland, and even worked with Frank Bruno in the 1970s. He took Liverpool fighter, Billy Aird, into the family home when he needed somewhere to stay in London: “We didn’t have room, but we squeezed him in,” said Joan.

When many of the city’s dockers were laid off in the 1980s, Con took his pay-out and bought a pub – the Clarendon Arms on Camberwell New Road.

“That was another time in their lives,” said Joan. “Dad had a lot of young friends, he had a lot in common with them because of the work he did at the club. He was a friend to everyone – he liked a drink and a night out, he was a proper Bermondsey man.”

Con at the Savoy (second from right) at The Savoy

Later Con and his wife moved out to Hayling Island near Portsmouth, but he would still drive up to Bermondsey for the big shows. “He couldn’t miss them,” said Joan.

“He just loved the club – a true Fisher boy.” Con’s commitment has been reflected by the outpouring of support the family has received since the news of his passing. “It’s been amazing,” said Joan.

“We’ve had hundreds of cards and messages, all saying how generous he was. People have said, ‘If it wasn’t for your dad I wouldn’t have boxed – he paid for my bus fare, or my boxing boots’. We never had much but what we did have he shared.

“He always championed others – he was a humble man, and would wonder what all the fuss was about now!” This caring approach was not reserved just for boxers and the club – Con nursed his wife, (also called Joan) during her final years before she passed away in 2006.

Joan said: “Dad was a complete hero, his care kept her alive when she was seriously ill. We were so proud and grateful for the way he cared for her, and he always said that it was a privilege to return the care and love she had given him.”

After Con’s funeral this week, Joan said:?“The church was packed, there was about 300 to 400 people there. There were lots of lovely stories and messages. As one of the old boxers said, ‘the church was full of love’.

“It was a great day for a great man. Everyone loved him.”