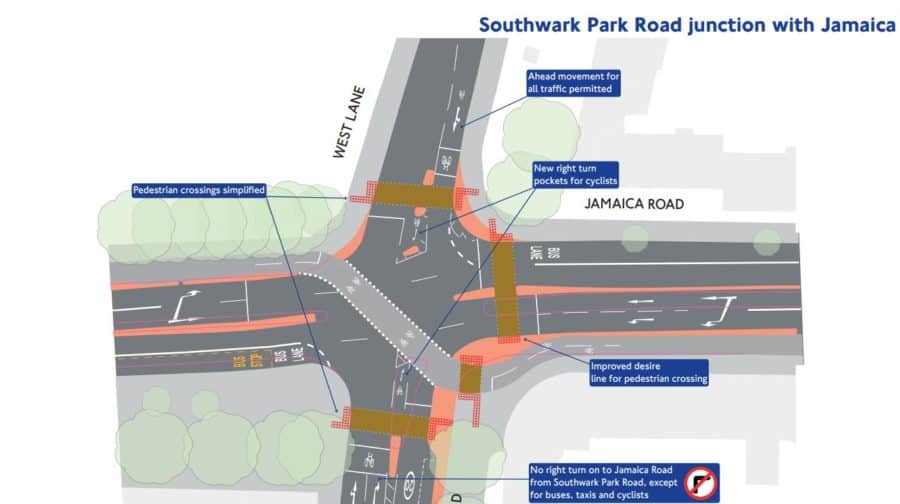 A map which shows the banned right-hand turn

A petition against a banned right-hand turn from Bermondsey’s Southwark Park Road into Jamaica Road has been signed by nearly 800 people.

Cars have been forbidden from turning right into Jamaica Road since the end of last month, as a segregated cycleway was opened. Cyclists are not barred from using the right-turn.

The petition, started last week in opposition to the change has hit 766 signatures at the time of writing.

The petition states: “Due to growing concerns by residents of both Bermondsey, Rotherhithe and neighbouring areas, we believe, as a community, that this amendment should be withdrawn, and for the right turn into Jamaica Road to be reinstalled for use by all motor vehicles.”

Among the concerns raised are increased congestion leading to the Rotherhithe Tunnel and noise pollution from queuing traffic attempting to use other routes.

“This will cause even more traffic,” said one signatory.

“I need to use my car at times and currently it’s taking me 40min to do an 8 min journey.”

Another, Jan McIntosh, added: “This is going to cause utter chaos. Who in their right mind would ever suggest this. Totally ridiculous.”

The move lasts for a year initially before being reviewed. In consultation, TfL said the move was necessary to prevent congestion.

“We’re absolutely determined to make our roads safer for people walking and cycling and Cycleway 4 means that people can now cycle safely without having to mix with cars on Jamaica Road,” said TfL’s Nigel Hardy.

“The banned right turn has been put in place in partnership with Southwark Council, for a trial period of twelve months to mitigate against a potential increase of traffic using Southwark Park Road to access Rotherhithe Tunnel.

“The trial period has been designed to give local traffic time to get used to the changes and we are monitoring the scheme closely to ensure that the changes are working as intended and benefiting local residents.”

I live between St James and Southwark Park Road and gave my 2p about that funny right turn during consultation. When it was implemented, unfortunately and annoyingly, I was right about St James stacking up. BUT what has also happened is that it’s ended the rat runs, and the crazy frustrated driving around my area. I don’t drive but I live here and think that is something good to consider.

Am I missing something because as of today there’s a right hand lane from Southwark Park Road onto Jamaica Road that allows you to turn right and everyone is doing it at every turn of the lights.

Did this get over turned or is literally everyone breaking the law?

Easier turning left from West Road so thankyou. However there is still a problem turning right at the Rotherhithe roundabout with more traffic coming from Surrey Quays it is very difficult to slide through the traffic and proceed. Your bus drivers must be fuming as they approach from the nearside lane of Jamaica Road infuriating a lot of drivers when coming across to turn right.
Your review of this problem would be a appreciated.