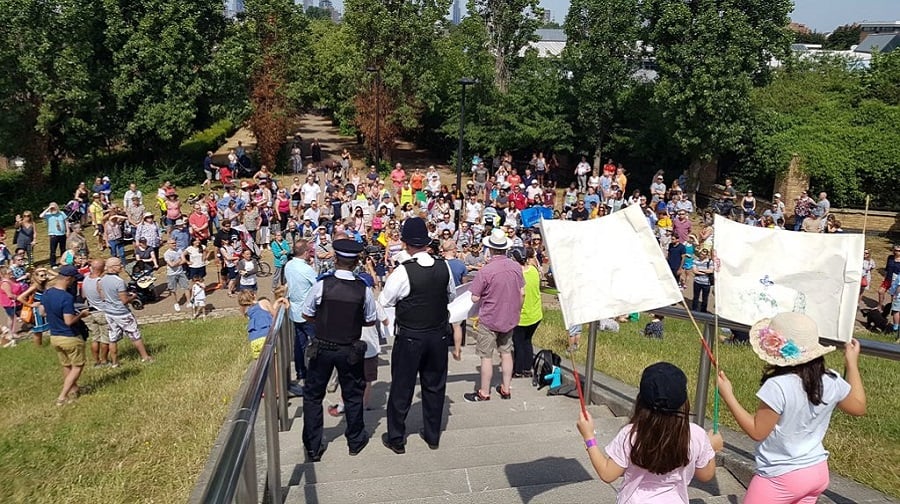 Hundreds turned out for a march to 'reclaim' Rotherhithe after a spate of crime (Credit: Steve Cornish)

Hundreds of residents turned out for a march in a display of solidarity against crime in Rotherhithe and to “reclaim” their area after a string of incidents.

Sunday’s peaceful demonstration was organised by the recently-launched Canada Water Safety Network after the community became concerned by muggings and knife crime in the area, particularly Russia Dock Woodland.

A huge crowd of about 400 people met at Stave Hill steps to march through the streets of Rotherhithe armed with banners painted with slogans such as “no robbin’ hoods in the woods”.

Claire Thurlow, who helped organise the event, said the strength of support “underlined just how concerned people were about the spike in knife crime” in the area. “There is still some unease ahead of the school holidays – a time when crimes seem to peak – but reclaiming Russia Dock Woods was a potent symbol,” she told the News.

“It is a green lung helping a community to breathe; it has artery pathways that connect us to each other – to home, to work, to school, to fun.

“It is used by activity clubs and groups across the demographic, every class, creed or nationality. “It is bordered by five schools, four primary and one secondary and the crowd reflected that.

“Safety is paramount and affects us all.”

Steve Cornish, chair of the Friends of Russia Dock Woodland, said the group sent “a lot of gratitude to the organisers of the event for their efforts”.

“It’s definitely sent out a loud and strong message to the people in power that we are not going to let this area go down,” he said.

“We don’t want it to be just a one-day wonder and I’m sure it won’t be – we want to carry this on and show that we are fighting against the massive rise in crime in the last year or so.” A public meeting was also held at Redriff Primary School on Friday to address the community’s concerns over crime in the area.

As a result of the meeting, police patrol shifts have been increased to cover the early morning period when some of the recent muggings have taken place.