Hundreds turn out to pay respects at Tommy Blackmore’s funeral

A special service was held in Honor Oak Crematorium before a celebration of the 20-year-old's life took place at Millwall Football Club. 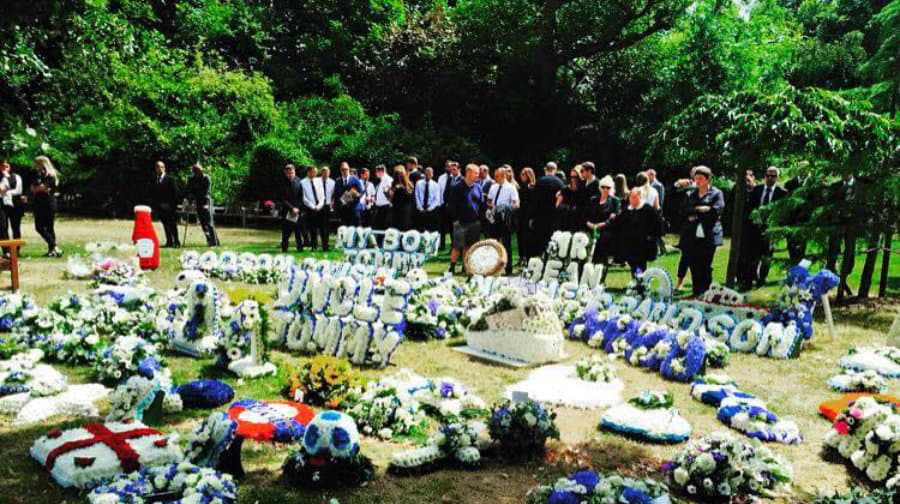 Mourners by a sea of tributes.

Hundreds of mourners gathered yesterday to give Tommy Blackmore a final send-off.

A special service was held at Honor Oak Crematorium after a funeral cortège travelled from his home in Vaughan Street, via Millwall Football Club and the Blue in Bermondsey.

Dozens of colourful floral tributes, many portraying items relating to Tommy’s life such as a football scarf and a bottle of ketchup, were transported in a Millwall fans bus.

Tommy was a passionate Lions fan, and also played for a number of local clubs, including Stansfeld FC. The team held a minute’s silence before a match that was played on the morning of the funeral.

Minutes silence observed today for the passing of one of our ex players #TommyBlackmore RIP pic.twitter.com/Tzs0ZlIi94

Following the funeral, many mourners held a celebration of Tommy’s life at The Den stadium, where they sang songs including “One Tommy Blackmore” and “Spirit in the Sky.”

Tommy’s mother Maureen told the News: “We are all so grateful to the hundreds of people who showed their support for the family and love for Tommy at the funeral. It was a real celebration of his life and the perfect send-off.”

The 20-year-old Bermondsey boy was laid to rest a month and a half after being killed at an incident near Tower Bridge. He was found “critically injured” in Queen Elizabeth Street by police and rushed to hospital. He couldn’t be saved and died soon after.

A 28-year-old man, Lloyd Smythe of Tabard Gardens Estate, Borough, was arrested and charged with murder. He has been remanded in custody and will appear at Central Criminal Court on November 29.

Special fundraising day to be held in Tommy Blackmore’s memory