‘I collapsed at work and woke up paralysed’: Bermondsey man now penning a book looking at ‘humorous side’ of spinal injury

Gavin Mullen, 52, was at work helping people relocate to the UK three years ago when he got a headache and collapsed to the floor 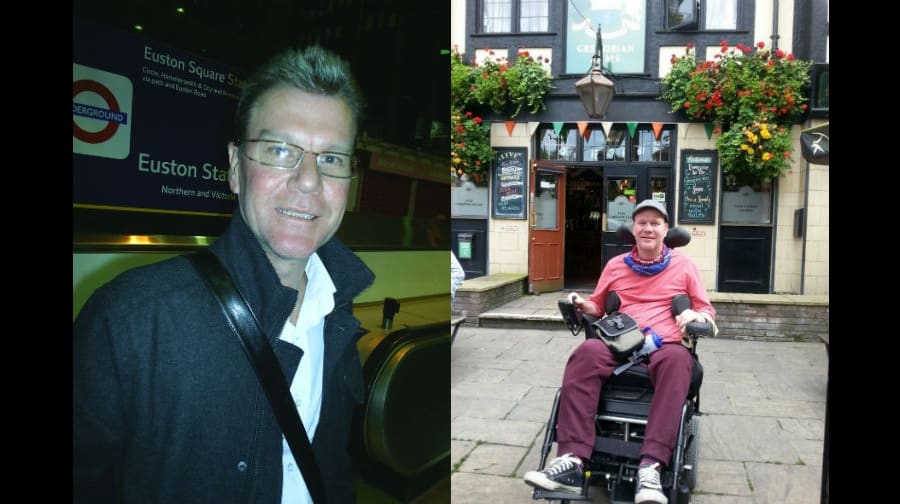 (L-R) Gavin Mullen - before and after the spinal bleed

A Bermondsey man who suddenly became paralysed at work has spoken about how he wanted to “die” when he woke up in hospital – but defied the odds to survive and write a ‘positive book’ on his experience.

Gavin Mullen, 52, was at work helping people relocate to the UK three years ago when he got a headache and collapsed to the floor. Later he was told that he’d suffered an unexplained spinal bleed, which would leave him paralysed from head-to-toe.

He was rushed to the Royal London Hospital where he stayed for five months before undergoing rehab at the Stanmore Spinal Injury Centre, to regain control of his right side.

“I was perfectly healthy and at work with no symptoms whatsoever of anything being wrong. Then I had a sudden headache and my spinal cord just started to bleed.

“They called an ambulance and they got there in about fifteen or twenty minutes but by that stage I lost a lot of my mobility and during the course of the afternoon lost everything else,” said Gavin.

“I was put in a coma. When I woke up and realised I was paralysed all I wanted to do was die. Initially the doctors gave me 48 hours to live and they didn’t think I would make it but I damn well did.”

Gavin said that a positive attitude helped him to rebuild his strength and beat his doctors’ expectations.

He said: “Everything the doctors thought was going to happen I just defied. They said this is how my life is going to be and I just defied it. Having a positive attitude helps.

“What I could not get over was that there were people young and old who were so negative. I used to get into arguments with them about trying to be more positive.”

Now, with the help of the spinal cord injury charity Aspire, Gavin is looking to write a book about his injury, to help educate others.

“I’ve started a book which is aimed at the more humorous side and positive side of spinal injury. I knew nothing about it when it happened and I thought every wheelchair was the same, but now I know that every wheelchair is different.

“I think a positive, open and honest book will be good for people,” he said.

Southwark NewsNews‘I collapsed at work and woke up paralysed’: Bermondsey man now penning a book looking at ‘humorous side’ of spinal injury