London’s first craft chocolate company: “If we’re going to challenge structures, why not change them all?” 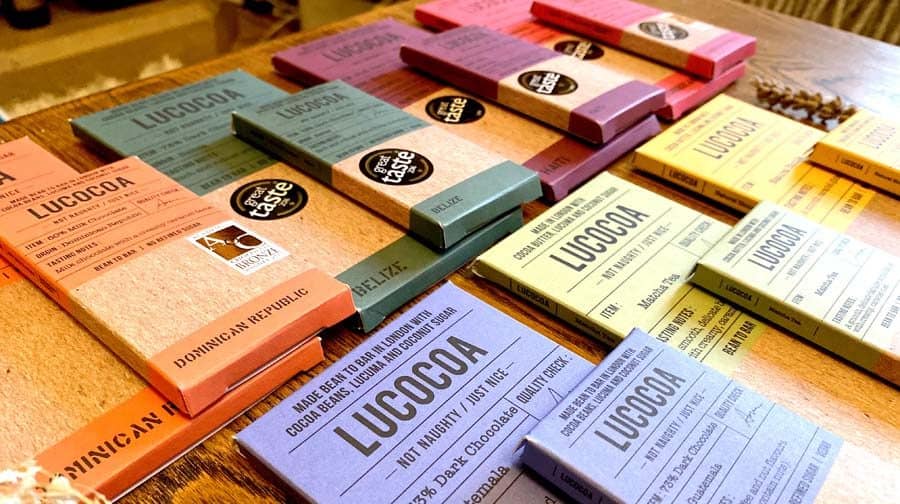 “Someone quite high profile in the chocolate world had messaged to ask how I was feeling,” she recalls. “They said they’d never thought about diversity before, ever. I didn’t know whether to be angry or sad. Then the penny started to drop – I’m used to being the outsider. You’ve got hundreds of chocolatiers in this country, but I know only one other person of colour. You have to really look at that and say: what’s going on?” 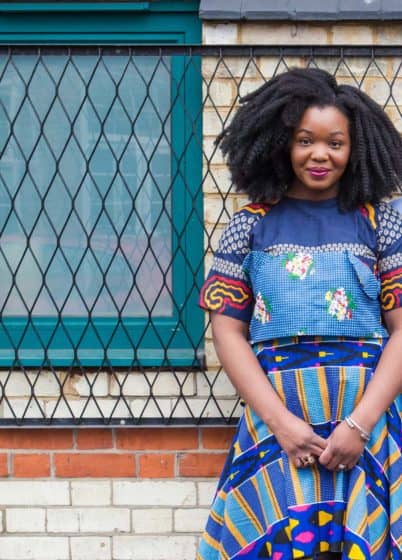 The founder of Lucocoa, London’s first craft chocolate company, isn’t one to mince words – or shy away from a challenge. Amarachi (“call me Ama”) taught herself how to hand-make chocolate from scratch in just six months, crushing cocoa beans with a rolling pin and taking their shells off in her spare room with a hairdryer to perfect the “nasties-free” luxury treats she realised were missing from British confectionery. Five years later, Lucocoa has won legions of fans – and scores of awards – with its intricately flavoured, small-batch produced chocolate in which bespoke roasted cocoa beans star.

“Chocolate is like wine and coffee: different regions create different flavours,” Ama explains. “But we don’t talk about that. It’s like a hidden secret. Big brands aren’t keen on letting you know what proper chocolate actually tastes like, because the quality of the beans they’re using isn’t great, they don’t care whether they’re farmed properly and many don’t pay growers the right price. That really pushed me.”

The former Comic Relief campaigner turned Willhemina Wonka has been on a mission to shake up chocolate with her bean-to-bar creations since launching Lucocoa in 2015. Ama’s come a long way from those early back bedroom experiments – she now has a factory shop in Bermondsey’s Spa Terminus – but her founding principles remain the same: no refined sugar, top quality cocoa beans, fair prices for farmers, and speaking out about the ethical hypocrisy of “brands that bang on about ending child labour and paying people properly, without doing anything about it.”

“I’m a bit of an activist,” Ama admits. “My background is in politics and campaigning, so it would have been really odd if I suddenly ditched that and started using beans with child labour in their supply chains. It’s the same with refined sugar – I couldn’t do it, knowing what I knew from a nutritional perspective.

“The fine chocolate world wasn’t very welcoming, initially. But it doesn’t do me any favours being quiet, hoping no one notices. It’s about not doing more damage.”

For chocolate is a deceptively dark business. An estimated 1.5 million children work in cocoa production in Ghana and Ivory Coast, the West African countries that produce two-thirds of global supplies. Nearly twenty years after “big chocolate” brands pledged to end child labour, a recent US government study found the practice is actually rising in the region. The average cocoa farmer’s income, meanwhile, falls well short of the World Banks’ extreme poverty line of $1.90 per day. Some struggle on just 75p, according to Fairtrade figures.

“It makes me really angry,” says Ama. “A lot of big companies go into these communities and say: this is what we want, and this is what we’ll pay. Take it or leave it. It all spirals from that – if you’re not paying farmers properly, they can’t invest in labour or equipment. They have to hire cheap labour instead, and that’s often kids. Sometimes they’ve been abducted and sent out to work. All those people in Ivory Coast and Ghana not being paid properly creates a vicious cycle. When we talk about kids in the supply chain, it’s African countries being exploited and having to cut corners.

“As a company, we might be small but we want to work out what our position is in changing that. There’s no point us saying to huge brands: ‘make better chocolate’, because that’s not in their business interest. So we have to.” 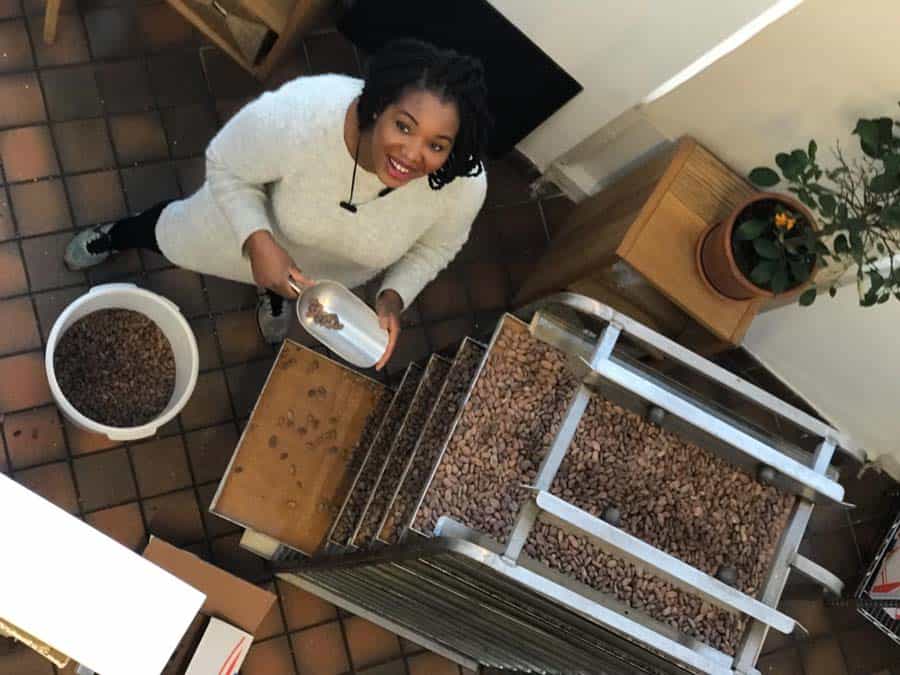 Ama sees the global reckoning of the Black Lives Matter movement as a long-overdue opportunity for widespread shifts. “I feel like now is the time, whilst the world is questioning a lot of things, to start breaking the old system in order to reform it,” she says. “If we’re going to challenge structures, why not change them all?”

And true to form, whilst that awkward DM encounter brought home the personal reality of imbalances in her industry, Ama is focused on the bigger picture. “The scene is not diverse at all – but that’s because we haven’t explored what ‘diversity’ means yet,” she stresses. “It means more than one thing. Equity for farmers. How much people are getting paid. Who’s making decisions, and about what? Who’s leading the narrative?”

Longterm, Ama plans to tackle those issues head on by opening a Lucocoa farm in Nigeria, where the government is keen to grow its cocoa business. “You’ve got two ways of doing it,” she says simply. “The same way as now, where it’s not sustainable, organic or fair. Or you can try to break that model to make it sustainable, organic and fair.

“It sounds like a massive challenge: so I’m going to have to do it,” she laughs. “Nothing is impossible.”

In the meantime, what can chocolate lovers do to make sure treats pack an ethical punch? Demand more, Ama urges. “Ask where the cocoa is grown and who’s involved in the process,” she advises. “Of course, sometimes you can’t be arsed; but there’s no badge or sticker you can just whack on a packet, unfortunately.”

You can also pop into Lucocoa’s HQ for a chat with the visionary herself. Just don’t call her that. “That’s reserved for really special people!” Ama cringes. “I’m just trying to challenge the status quo. We’re such a connected global world – people realised that during lockdown – and it sounds really hippy to say that we should all love each other, but there’s ways of doing it. You can impact certain things. You don’t have to take on the whole world, but if you take on a little bit of it at least you can say ‘I tried’.” 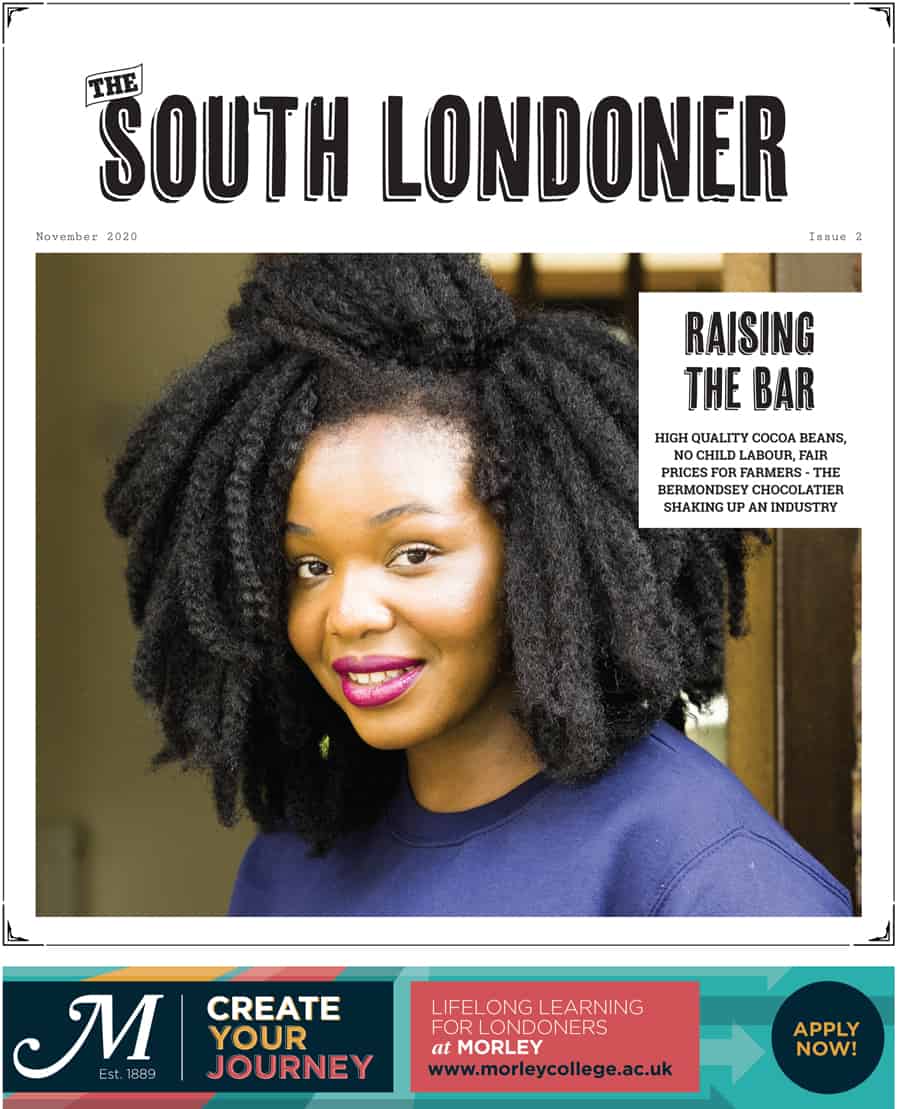 Southwark NewsNewsLondon’s first craft chocolate company: “If we’re going to challenge structures, why not change them all?”