'If we win, then watch out Southwark Labour council group because we’re after you and we intend to drive you from office' 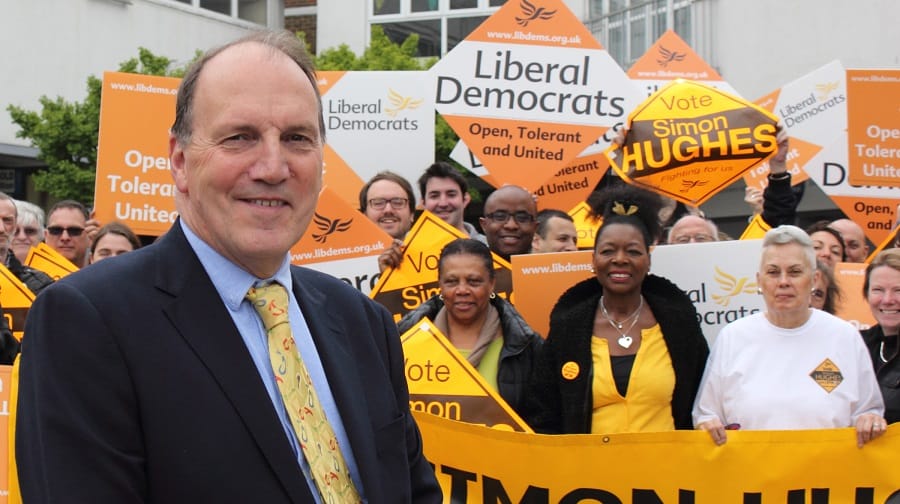 Having spent two years watching from the sidelines as a Labour candidate represented his old constituency of 32 years, Simon Hughes vows he is “absolutely ready” to win the seat back.

The Liberal Democrat, who turned 66 in May, admits he doesn’t know how many more years he will spend in politics, but is clear that he is fighting one election at a time.

“There are some informal suggestions I think coming from Labour that the Lib Dem candidate is too old – I regard that as offensive and I think the community would regard it as offensive,” he says. “I absolutely, definitely have it in me.”

He chooses to conduct the interview seated on a bench in the middle of the Blue in Bermondsey, with a constant flow of passers-by stopping to greet him.

It is impossible not to notice the Southwark Lib Dem headquarters directly opposite on Southwark Park Road, which sprung up after the Prime Minister announced a snap election on April 18, with the party’s bright orange placards plastered across each window pane.

“I’m absolutely ready and up for it and fit and well,” he repeats, before rattling off a list of commitments he has kept up during the two years since the 2015 general election, including being chair of London Bubble Theatre, and independent director of the London Football Association.

“I think last time we lost for the first time since I stood for reasons I think everybody knows, which were to do with a view that an MP [in coalition] with the Conservatives isn’t what people expected,” he says, recalling his five-year stint in Parliament when the Lib Dems were junior government partners to the Tories and voted on controversial issues such as the bedroom tax and tripling university tuition fees.

“I think a lot of people regretted that decision and thought they’d given us a bit of a kicking, but kicked us too hard,” he adds.

He admits that the tripling of the tuition fees was a “real issue” and says he regrets that they went up during the coalition government – but is just as quick to move the spotlight off him, and back on to Labour.

“Our policy in the 2010 election, which I voted for, was to get rid of tuition fees over six years. The Tories wanted unlimited fees.

“Labour had quite cleverly ducked the question – had they been in government they would’ve faced the exact same question.

“A big difference is that the Labour candidate is trying to fight the last election again and saying ‘look at all those horrible things that Simon Hughes had to be a part of when he was in government’. I’m fighting the next election.”

When pushed on the topic of the bedroom tax, and the fact he voted for it, he is ready with his response.

“I had to support the package, not willingly, and not happily,” he says. “In the end I spoke to say that what I wanted was that we should only require people to pay to have a reduction in benefit for their spare room if they were offered a similar property and turned it down.”

He continues his focus on Neil Coyle, the Newington ward Labour councillor who unseated Sir Simon in 2015 and who has been publicly critical of his own party leader, Jeremy Corbyn.

“In the last two years, whatever the MP may have been doing in Parliament, he also spent a lot of time on internal party battles, which he wasn’t elected to do, and he spent a huge amount of time having nominated Jeremy Corbyn, then being publicly critical of him, which I think is very dishonourable,” says Sir Simon.

The veteran politician says he is willing to take on the council and the government if elected as MP.

“In Southwark, effectively we are a one-party state,” he says. “A Labour council, member of London Assembly, mayor, and three MPs.

“My question back to the Labour candidate is ‘how many times in that time have you been publicly critical of them?’ I am willing to take on the council and the government.

“If we win, then watch out Southwark Labour council group because we’re after you and we intend to drive you from office and take over and run a radical people-centred, not developer-centred, borough council from May next year.”

Sir Simon says one of his priorities for Bermondsey and Old Southwark is to ensure that everyone from eighteen upwards has opportunities for education, training, skills, and apprenticeships – and wants to effectively become a “political support and guidance system” to help people.

He also wants to launch a week-long event in the summer which brings together the schools, businesses, and community and faith groups in the area, and which links Rotherhithe Music Festival with Bermondsey Carnival to bring trade and people to the area.

The Lib Dem grandee wants to bring back the 24-hour emergency clinic at the Maudsley, a psychiatric hospital in Camberwell, to give people a “safe place to go” when they are feeling depressed or suicidal.

He wants to bring back affordable accommodation for key workers, vows to challenge every planning application that doesn’t have 50 per cent affordable housing if elected, and says the council should have the right to decide whether to have the right-to-buy scheme in Southwark.

Sir Simon also believes he is the best candidate to take Bermondsey and Old Southwark forward during the Brexit negotiations.

“I know David Davis, the current Brexit minister, really well, so if it requires someone to go and knock on his door if he’s still doing that job then I think he’s more likely to listen to me than he would be to a Labour MP.”

“The Prime Minister is saying ‘what we’re going to offer you is a deal or no deal’ – well that’s bananas,” he adds. “We [the Lib Dems] are saying that people must have a choice between the deal, no deal if you want it, and the current position.”

Sir Simon admits that he believes the Tories will win the election – but if elected on June 8, he vows to be a “top quality community MP” for Bermondsey and Old Southwark.