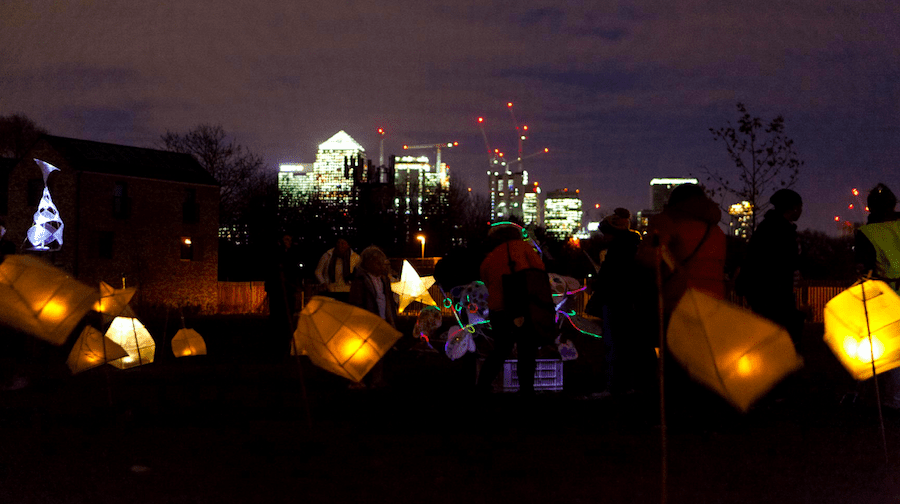 The annual five-day Illuminate Rotherhithe festival is coming back in November, building up to the Mayflower 400 celebrations, writes Anisha De…

This year’s festival will kick off with a lantern procession involving schools, youth groups and community centres situated between Tower Bridge and Rotherhithe.

Even though the 400 year anniversary of the sailing of the Mayflower is still two years away, the commemorations began last year and continue this November.

On Thanksgiving 22 November this year, the procession will arrive at King’s Stairs gardens, off Jamaica Road, where the exterior of St Peter’s and the Guardian Angels church will be illuminated by drawings of children from local schools inspired by Rudyard Kipling’s poem “The River’s Tale”.

The Illuminate Show in the church will feature speeches from local people talking about Plymouth’s “Pilgrim” colony and migration.

There will also be a presentation by Stave Hill Ecological Park and the Young Farmers on how the Pilgrims grew food, as well as music and merriment with artist Tricity Vogue acting as Mayflower colonist John Alden’s wife Priscilla Mullins, and much more.

During the six weeks before the start of the festival there will be a series of free lantern making workshops led by local artist and theatre designer Cathy Wren and makers from the Rotherhithe Shed.

A food project has also been organised with the locals since March, and will continue until November.

In September there will also be two artefacts and mudlark find exhibitions in association with the Cuming Museum at the Rotherhithe Picture Research Library.

From 15 October, ceilidh and barn dance band, The Ceilidh Tree, will conduct free workshops for a week with local schools. It will culminate in a grand ceilidh at the Bacon’s College on 9 November.

A performance by the Citizens of the World Choir, who will be singing songs of migration, is scheduled for 23 November. And on 24th November  a family ceilidh will take place at the Mayflower Hall on Neptune Street, as well as a free production of Rotherhithe’s first home-grown comic opera “Lo Spedale”. There will also be a of film screening of contemporary artist Ai WeiWei’s film on migration “Human Flow” and “The Pilgrims” on 25 November, at the Rotherhithe Sands Films Studios.

The themes of migration and local history will feature throughout the festival, which is being held from 22-26 November.

More information about the festival can be found at: illuminaterotherhithe.co.uk

You can donate for the Lo Spedale Opera at: www.gofundme.com/musicaanticaopera