Michael Bagnall, 22, and Andrew Bayne, 37, were both sentenced to life in jail. 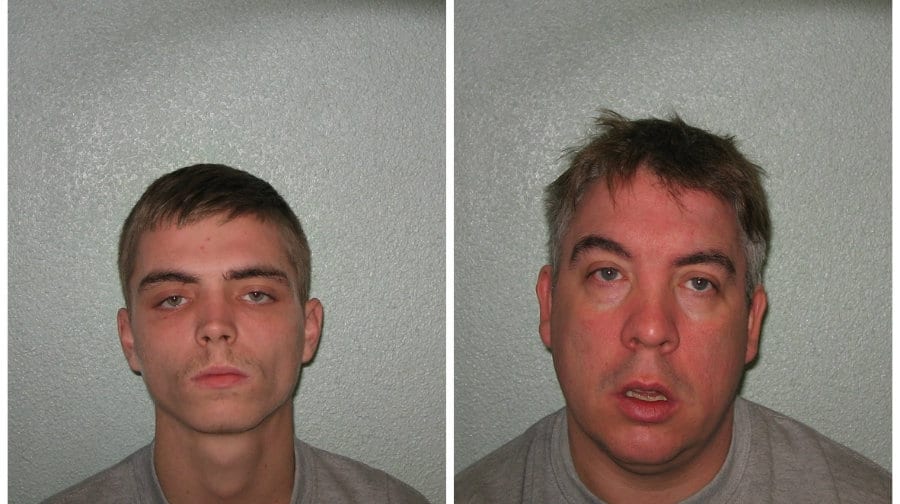 A remorseless killer yelled “I’m glad he died” as he and his gun-toting uncle were jailed for a total of 58 years for the love triangle execution of Ben Purdy.

Michael Bagnall, 22, aimed a torrent of foul-mouthed abuse at the judge as he was jailed for life for the murder of the 18-year-old trainee plumber.

He screamed: “Suck your mum, you p***y-hole” before turning to the press bench and sneering: “Put that in your newspapers, I’m glad he’s dead, mother-f*****s.”

Bagnall, who apparently hears voices telling to harm himself, organised the hit on Purdy, enlisting his army fanatic uncle Andrew Bayne, 37, to fire the deadly shot.

Bagnall’s sister Lee-Ann dashed from the public gallery packed with family members in tears when the sentences were delivered, while Bayne told his nephew to “shut your mouth” and apologised to the judge.

Judge Christopher Moss QC told them: “You, Andrew Bayne, clearly fired the shot that killed him and you, Michael Bagnall, intend[ed] that shot to occur – you are each as guilty of murder as the other.”

Violence flared on November 23 last year amid escalating tensions between Bagnall and Mr Purdy over the affections of Ashley Adedeji-Adebisi.

Mr Purdy started dating Ashley shortly after she broke off a long-term relationship with Bagnall because he was violent and abusive.

But Bagnall refused to leave the couple alone, deluging them with messages and threats, calling her a “fat slag” and making rude remarks about her mother.

Mr Purdy decided to confront Bagnall with the help of two friends, Callum Malone and Jack Walker, who armed themselves with a metal pole and a bike chain.

They fled when confronted with a knife-wielding Bagnall and Anthony Bayne, 34. Bagnall called for back-up from Andrew Bayne and two cousins Reece Bayne, 19, and Harry McAleer, 18.

After the attack on Mr Purdy, Andrew Bayne put the gun in Mr Malone’s mouth but was persuaded to flee instead of pulling the trigger when Reece Bayne called out: “We need to go, he’s dying”.

Bagnall tried to force his uncle into taking the blame for the shooting while they were awaiting trial, bullying him by flushing his head down the toilet and scrawling marker pen on his face.

Bagnall was also found guilty of affray, and Bayne was convicted of possession of a firearm with intent.

They are due to be sentenced on December 11.

Judge Moss ordered the seizure of the cache of imitation guns, decommissioned firearms and knives from the Bagnall home.

Animals – with a collective IQ of about 50 for the lot of ’em!