He was handed eighteen weeks in prison

A man who spat at a 436 bus driver during the peak of COVID-19 second wave has been sentenced to eighteen weeks in prison. 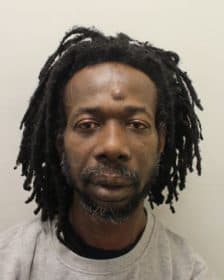 Michael Aidoo, aged 44 and of no fixed address, pleaded guilty to common assault at Croydon Magistrates’ Court on Thursday, March 25, 2021.

The court heard he had boarded the 436 bus at Queens Road in Peckham on the morning of Saturday, February 13 and refused to pay the fare, instead trying to walk past the driver.

When challenged, he became abusive, pulled down his mask and spat in the driver’s direction before disembarking from the back of the bus.

Fortunately the driver was protected by a screen and he was also able to use a swab to take a sample, which was then given to offers at Lewisham Police Station for analysis.

Police found a direct DNA match with Aidoo, who was arrested at Vauxhall Railway Station on Wednesday, March 24 the next month.

In court he was sentenced to eighteen weeks in prison and ordered to pay £128 victim surcharge.

Detective Sergeant Ian Beattie from the Met’s roads and transport policing command, said: “This was a disgusting act against a key worker who was providing an essential service during the lockdown.

“To be spat is completely unacceptable and it is right that Aidoo has been given a custodial sentence to reflect the seriousness of this offence.

“Spitting is disgraceful at any time, but it is even more shocking in the middle of a pandemic. We will not tolerate such behaviour.”