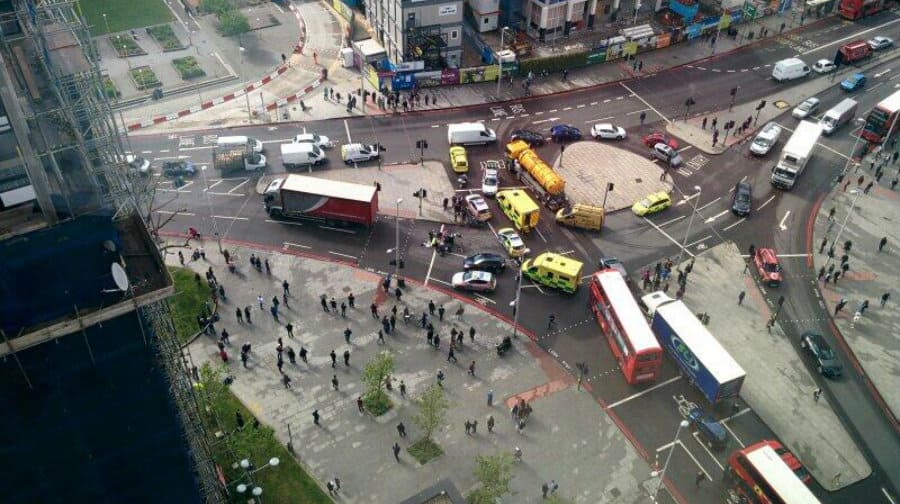 An aerial view of the scene after the incident in which Walworth chef, Abdelkhalak Lahyani, lost his life

An inquest has revealed how a chef was killed in a collision with a lorry as he cycled around the Elephant and Castle roundabout last year.

Abdelkhalak Lahyani, of Portland Street, Walworth, was cycling to work at around 4pm on May 13 when he was struck by an HGV turning left onto Newington Butts.

The inquest, led by Assistant Coroner Briony Ballard, concluded that the 47-year-old was in a cycle lane between two rows of traffic when he was struck and pulled under the nearside wheels of the lorry.

The driver, named as Edwin Humphries, was visibly shaken as he gave his testimony at Southwark Coroner’s Court on Thursday morning last week. When asked by Ms Ballard if he remembered accurately the events of that day, he replied: “It lives with me every day.” The inquest heard how Mr Humphries, of Telford, was not familiar with the junction and believed he was in the correct lane for turning left as he stopped and indicated to do so.

The road markings in fact advised the traffic in that lane to proceed straight on over the roundabout, which is the route Mr Lahyani is suspected of trying to take in the neighbouring cycle lane.

It was concluded that it was likely as they both set off, Mr Humphries turned left as Mr Lahyani was trying to go straight on and was killed instantly.

Paramedics and the police tried to rescusitate Mr Lahyani but when the air ambulance arrived the doctor pronounced him dead at the scene.

Ms Ballard gave the cause of death as “multiple traumatic injuries and road traffic incident” before giving her “warmest condolences” to both Mr Lahyani’s widow, Fatimah Manah, 44, who sat through the painful hearing, and Mr Humphries.

PC Andrew Smith who investigated the incident, told the News he had never seen a road layout like the one at the Elephant and Castle roundabout where cycle paths are located between lanes of traffic. “It’s a very complex junction,” he told Miss Ballard in his testimony.

After Mr Lahyani’s death, Southwark’s council leader, Peter John backed the family’s calls for a rush hour ban on HGVs in central London and this week he has confirmed to the News that he was still pushing for this to happen.

“I hope the inquest has given Mr Lahyani’s family some sort of closure and my thoughts remain with them,” said Cllr John. “Although a lot of work has been done, or is being done, to try to make our roads safer for cyclists, I still maintain that we must look at introducing some sort of ban on HGVs, particularly during the rush hour, to protect commuters and I will continue have conversations with TfL and the GLA to see how this can be taken forward.”

A Transport for London spokesperson said: “We are spending almost £1bn to create segregated and safer cycle lanes to protect cyclists from other vehicles, including around the Elephant & Castle area. The Safer Lorry Scheme, which came into operation in September, mandates sideguards and blindspot mirrors, helping to make London a safer and more cycle-friendly city.”

Coffins to be laid outside TfL HQ

To mark Mr Lahyani’s death along with twenty other cyclists who were killed on London roads since November 2013, 21 coffins are going to be laid outside Transport for London’s headquarters tomorrow.

The third annual Stop Killing Cyclists ‘die in’ will demand all the London mayoral candidates call of ten percent of TfL’s budget be invested in cycling infrastructure.

Stop Killing Cyclists co-founder Donnachadh McCarthy said: “The current 1.4 percent of the budget being spent on cycling safety is an insult to those dying form collisions, pollution and inactivity diseases and the tens of thousands of Londoners living every day with terrible health impacts.”

The die-in will run from 5pm till .30pm outside Palestra Building in Blackfriars Road.

This junction was rebuilt only 4 years ago, and concerns were raised by people, including southwark cyclists, at the time.

“PC Andrew Smith who investigated the incident, told the News he
had never seen a road layout like the one at the Elephant and Castle
roundabout where cycle paths are located between lanes of traffic.”

PC Smith should take a look at the northern end of Waterloo Bridge, which has exactly the same type of layout.

What a crass comment by Peter John the Council Leader, of no relevance at all when this fatal crash happened at 16.00, before the evening peak and well outside the morning peak where there is an ill informed populist baying for a rush hour ban, with an arbitary slot of 08.00-09.30, which has no objective evidence on which it is founded, and no defined cordon boundary. With the current no HGV before 07.00 position, even a cordon just limited to the inner London Boroughs would effectively stop any HGV access to Central London before 10.00 at the earliest.

I’d also suggest that PC Smith does a bit more research into advance stop lines and the recognised standard – in several locations around London, where a substantial flow of cycle traffic goes straight ahead, or a large number of motor vehicles turn left – see note on hierarchy later – but one option is to get left turning traffic in a left turning lane to the left of cycle traffic going straight ahead. dealing with the move which forms one of the sequences fitting that ‘80% of HGV-cycle fatal crashes’ pattern.

Only one of the 2015 fatal crashes actually happened within the time slot being promoted, and from observation both of traffic entering London on the main motorways, and the streets gridlocked during the peak hours, most HGV operators avoid the commercially stupid action of paying for truck and driver going nowhere fast – most trucks vanish from the M1 and M4 from 07.30, and when I’ve cycled around east London, 17.00 with a near static mass of private cars and hardly a truck in sight feels a lot safer than during the day when 30-40% of the traffic is construction HGV’s, travelling at speed on near empty main routes, hauling materials in and out from Central London sites.

If however we instead actually took the evidence collated from objective and impartial investigations (which the Borough of Southwark or TfL are required by law to carry out for motor vehicle crashes – RTA 1988 Section 39.3.a) we might see some clear patterns, emerging, and from this, also identify the hazards which provide the conditions for a fatal encounter, and the ways in which the risk of that fatal encounter were not managed effectively.

This crash would appear to fit the pattern of over 80% of fatal HGV-cycle crashes. The rear, offside of the cycle has initially been hit by the front nearside quarter of the HGV. The failure of current interventions (side guards, and the class 5 and 6 mirrors) is that they do nothing to address the issues linked to this 80% of the fatal crash total. As noted, it is very likely that the presence of the 3 of these ‘blind spot’ mirrors help to create the massive ‘blind zone’ where the cyclist is riding and the truck driver is directing their vehicle.

So, looking at the position of the truck after the crash, it looks very much, from the wide turn, as if the vehicle had turned left from Lane 2 with other vehicles in the left turn lane (lane 1). This needs to be clarified in any investigation and the reports of the incident, and emphasises the case to have such reports freely available for scrutiny and lessons to be learned as they are for air, rail and marine incidents. TfL or Southwark are required by law to carry out investigations, Section 39.3.a RTA 1988 and somewhat perversely, given the conflict of interest, they then have to tell themselves what measures are required to prevent any future crashes of the same type, on the existing road and in any new designs (Section 39.3.b & c) . Just for good measure they might also use the lessons learned to inform their road safety campaigns (Section 39.2.a). There seems to be little guidance from DfT on how this is delivered, and no call at all to make it openly available to the public, although an FoI request is always an option.

I was at the vigil, and by observation it became clear, from the number of drivers turning left from lane 2 what intervention was needed to remove the hazard of a vehicle in Lane 2 turning left. A substantial traffic island, extending out as close to the roundabout as possible, perhaps with the additional detail of a gap to give cycle traffic heading for Kennington a similar space ‘enforcer’ against the motor traffic moving alongside. Cyclists bound for Borough High Street and Waterloo would have a lane to the left of this island , and the island would extend well back along Walworth Road. To the left of the cycle lane the left turn motor traffic, with the further option of a lane for the left turning cycle traffic. Detailing at the roundabout would also place a physical block (a small island between the cycle lane and the left turn motor traffic lane) to deter drivers who try driving up on the left and then try turning ‘right’ to undertake the traffic queuing in the outer lanes. In the hierarchy of safety elimination of the conflicting moves by physical barriers and separated routes is the prime objective. making the split early and with road markings relies (as seen here) too much on driver and cyclist compliance to eliminate the risk of a crash. If I was writing the Highways equivalent of an RAIB report, as called for by the Transport Safety Committee in March this year it would be calling for a traffic island with HGV deflecting kerbs at the critical end point to endure that no driver of a vehicle in the second lane could repeat the move which killed Abdelkhalak Lahyani

The TfL ‘standard’ “We’re doing all we can” litany trotted out here increasingly sounds like a tired and cracked record. Let’s have an incident-specific statement, based on the investigation that TfL MUST make under Section 39 and highlighting the potential changes they MUST consider under the same legislation.