"There is very little more we can do with this layout in this configuration to affect users’ behaviour. I believe any further changes could be detrimental," court told by TfL 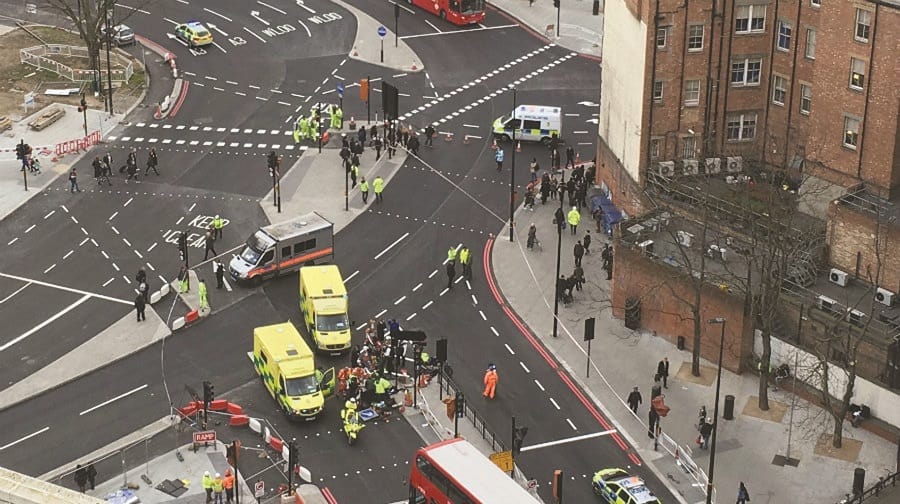 The “confusing road” layout of the new Elephant and Castle junction may have contributed to the death of a young motorcyclist, a court has heard.

Charlie Cooper, 21, was riding through the north side of the junction on his red Honda on March 16, 2016.

He came to a stop in the third lane at a set of traffic lights before the junction with Newington Causeway. Beside him in the far-left lane was Daniel Inwood, riding a blue Honda.

Both men drove on as the lights turned green.

But Mr Cooper (hoping to turn left into Newington Causeway) crossed paths with Mr Inwood, who was travelling clockwise around the bend to New Kent Road.

As they collided at approximately 27mph, Mr Cooper and Mr Inwood slid along the ground for 20 metres.

Both men mounted the pedestrian island beside Newington Causeway.

Mr Inwood told an inquest at Southwark Coroner’s Court on Wednesday last week that Mr Cooper ended up underneath his motorcycle after this collision.

“We got past the London Road turning, and the lights went green,” Mr Inwood said.

“That’s when before I knew it, this other motorcyclist moved straight into the side of me, and it was too late.

“We basically slid along the tarmac. It felt like an eternity but I guess it was only a couple of seconds.”

He recalled a cyclist had rushed over to help them both, while traffic around them ground to a halt.

“I tried to move his bike. It was crushing him,” Mr Inwood said. “I remember rolling up my jacket and using it to support him.”

Paramedics came via air ambulance, and transported Mr Cooper to King’s College Hospital, after starting open-heart surgery at the roadside.

After desperate attempts to save Mr. Cooper, surgeons judged that the damage to his heart was “irreparable”, and at 5.45pm, the decision was made not to continue to resuscitate.

The inquest heard that the collision happened during Phase Thirteen, out of fifteen during the conversion of the junction from a roundabout to a bend.

Despite having commuted via the junction “nearly every day” during the redevelopment works, Mr Inwood told the court: “I’m never sure what lane you can use. Some lanes you can use. Some you can’t on a motorcycle.

“Anyone who used [the junction] for the first time would find it confusing. There was a lot going on and road works still going on when the accident happened.”

Met Police collision investigator Chris Wright also told the Court that Mr Cooper “may have been confused by road markings pointing straight ahead if he had been planning to continue to Newington Causeway”.

The coroner, Sarah Ormond-Walshe concluded that Mr Cooper, of Walton on Thames, died from a road traffic collision, resulting from multiple injuries.

After the hearing, Mr Downing described his nephew as a “mild-mannered type of person who could look after himself and was self-sufficient in most ways”.

“He was deeply thoughtful, and caring towards other people and his family.

Mr Cooper had recently been travelling in India, and it was said the he had a keen interest in philosophy.

Mr Downing added: “There were two grievances: the loss of my nephew Charlie, and needing to clear his name.

“At the end of the day we have always got a battle to face in mourning Charlie’s death, and we didn’t want to have to drag up old memories from having to go through all of this.”

Charlie Cooper’s family and local campaigners, claimed at the hearing that despite Mr Cooper’s death, the dangers that could have contributed to the accident were still present.

Describing the clockwise traffic lights where Mr Cooper and Daniel Inwood were stopped, Mr Downing said: “The ring road clearly indicates traffic is ongoing to the right [to New Kent Road], but there are two arrows saying straight on [to Newington Causeway].”

“I’m just pointing out that confusion still exists. There is traffic still moving from one lane to the other, and the signs do not improve this.”

Mr Holmes responded: “I think the junction is as good as we can get it.

“There is very little more we can do with this layout in this configuration to affect users’ behaviour. I believe any further changes could be detrimental.”

Mr Downing asked whether a 20mph speed limit could be enforced (The two motorcyclists had been travelling at 27mph as they collided).

Mr Holmes replied: “There are plans to introduce them”.

It was also revealed that green signs positioned before the London Road junction – advising drivers which exits to use – were only erected as a result of post-accident audits.

Mr Holmes was unable to disclose whether accidents had decreased after the redesign was completed, because the most recent data was only from June 2016.

To the family’s dismay, the coroner decided against producing a Prevent Future Deaths report, an option for coroners to encourage public bodies to act to prevent similar incident happening in future.

The idiot who came up with this insane layout has so much blood on their hands, They changed a simple plain hassle free roundabout into a deathtrap maze, Well done TLR you fucking morons.