“He never complained. When he was young, Chelsea Football Club had wanted to sign him, but because I couldn’t take him to training, he had to give up." 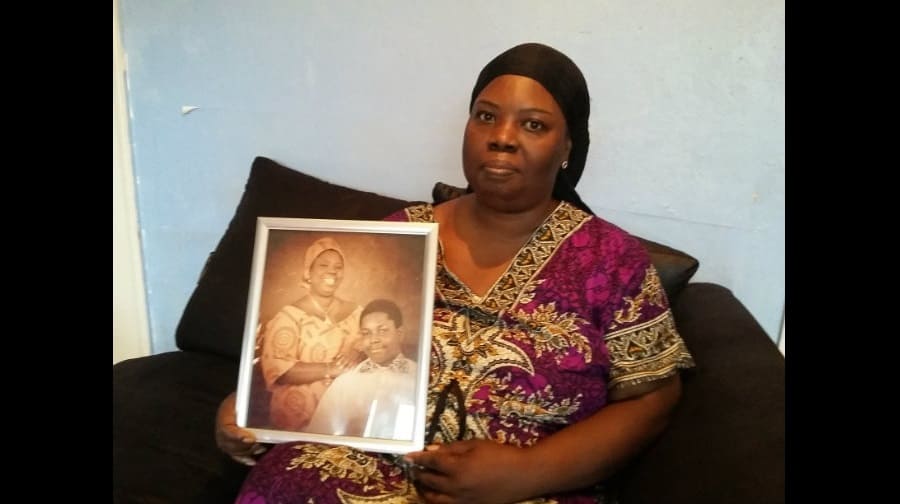 Andrew's mum, Tina Ababio, holds a photo of herself and her late son

A 50-year-old man was arrested in connection with murder on Tuesday, following the death of a nineteen-year-old from Bermondsey last month.

On the night of August 3, Andrew Oteng-Owusu was attacked while walking back from a corner shop with his mum’s shopping.

The young lad, who was waiting for his A-levels results, and hoped to go to university, was allegedly stabbed whilst walking a short distance from his flat in the Lovelinch Estate, near Millwall’s stadium.

His tightly-knit community joined in collective grief the following morning, after Andrew was pronounced dead at 11.30am in King’s College Hospital, twelve hours after emergency services were called.

None have felt the pain more acutely than his mother, Tina Ababio, who was dependent on her only child as her “sole carer”.

The former nurse of 45 has long suffered from issues with her kidney, and uses a walking stick. Andrew helped her use a dialysis machine three times a week, and ran all sorts of errands which any child would normally expect to be taken care of by their own mum or dad.

Tina has told the News that for over a year, Andrew offered many times to donate one of his own kidneys and restore his mum’s health.

“He would see me feeling tired and in pain, and he would tell me ‘mummy, I will give you one of my kidneys, and make you better’.

“But I would always tell him, maybe when you are older, 21 or 22, and you have thought about it and you are sure,” Tina said.

Tina’s doctors have now said it is too late to transplant of one of Andrew’s kidneys to her.

By all accounts, the young man from the Lovelinch Estate was unusually gifted with an unending wilfulness to “love everyone” and “see the good in everybody”.

Andrew’s grandma, also called Tina, was abroad when the agonising news was broken to her in a phone call from her daughter.

“I nearly fainted,” she said. “When people found out what happened to Andrew so many people came here and cried for this young man and his mum.

“If you come to this country and you want to work hard and you are pleasant then you will be welcomed. That is what our family has always found. That’s why we raised Andrew to love any Tom Dick and Harry.”

Since his tragic death, the News has heard endlessly how Andrew was known by everyone in his estate as a “helpful” and “caring” boy.

“Even the corner shop man was crying, he had known Andrew since he was seven,” his grandma said.

“Children on the estate would knock for him every day and he would always have children follow him home from school. He loved bringing friends home and cook for people and play Xbox. Everyone was welcome here.

“He never complained. When he was young, Chelsea Football Club had wanted to sign him, but because I couldn’t take him to training, he had to give up.

“Even then, he understood and he didn’t complain. He just accepted it and was happy.”

Following his death, Met Police officers knocked on every door on the estate and spoke to everyone they could.

Scotland Yard maintain that they urgently wish to speak to a certain young man (in his late teens or early twenties – wearing a white t-shirt and a New-Era cap) who helped Andrew walk to his block of flats after the wound was inflicted. So far, there is still no-one who has been able to name this individual.

It is believed that Andrew bravely managed to pull himself up several flights of stairs to his flat.

Tina heard a banging on the door. She called out down the stairs “Nana” to him, as she always would. But this time her son’s voice did not reply.

She came down to find her boy collapsed at the front door.

“All he could say was that he couldn’t breathe and that he wanted water. He kept saying it over and over,” Tina said.

“One of his friends came up here, and we were trying to ask Andrew ‘who did this to you’, but he couldn’t say anything.”

With her hand, Tina gestured a line across her thigh to show where the blade had cut Andrew’s right leg. The wound caught a vital artery that pumps blood back up to the heart from the leg.

“He was drenched in blood. The doctors kept giving him more and more blood but they could not stop the bleeding.”

Andrew’s life was prolonged for twelve hours, and he was pronounced dead on August 4.

His grandma said: “We are not angry and we have reached a point where you realise that revenge and mourning will not make things better for Tina and will not bring Andrew back. We just hope [the attacker] will be brave, and come forward.”

Andrew’s body is currently at Greenwich Mortuary, and Tina has said she hopes to bury her son at Greenwich Cemetery.

Detective chief inspector Mick Norman, who was investigating the case, said Tina was “holding it together remarkably well”. “She’s a lovely woman,” the officer said.

Tina’s close friend, Victor Owusu, has been helping to care for her, and arrangements are ongoing for a carer to be provided for her.

The fifty-year-old suspect has been bailed until a date in November pending further enquiries. Scotland Yard is still appealing for information.

Bad. In July of 2015. it was discovered that I got type 2 diabetes, By the end of the July month. I was given a prescription for the Metformin, I stated with the ADA diet and followed it completely for several weeks but was unable to get my blood sugar below 140, Without results to how for my hard work. I really panicked and called my doctor. His response?? Deal with it yourself, I started to feel that something wasn’t right and do my own research, Then I found Lisa’s great blog (google ” HOW I FREED MYSELF FROM THE DIABETES ” ) .. I read it from cover to cover and I started with the diet and by the next morning. my blood sugar was 100, Since then. I get a fasting reading between the mid 70s and 80s, My doctor was very surprised at the results that. the next week. he took me off the Metformin drug, I lost 30 pounds in my first month and lost more than 6 inches off my waist and I’m able to work out twice a day while still having lots of energy. The truth is that we can get off the drugs and help myself by trying natural methods..