Interview: Peter John – A decade of council rule in Southwark

Since May 2010 this Camberwell councillor and barrister has shaped Southwark and made decisions that affect all residents’ lives. The News asks him about his best moments, are there any regrets … and what next? 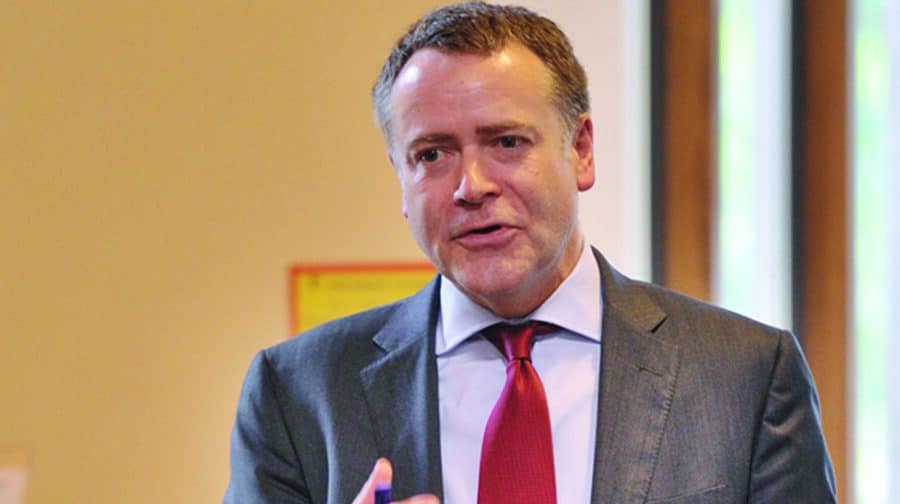 An emotional Peter John heads into his final week as Leader of Southwark Council – a decade since taking up the mantle –admitting it “feels weird to be hearing about plans that I won’t be involved with. I go with a heavy heart, and I feel torn, particularly at this difficult time. But ten years is the right amount of time for a political leader, if you’ve been lucky enough to be voted in that long.”

Ousting the Lib Dem/Tory coalition in Southwark back in May 2010, in a neat inversion of what was then happening in national politics, John has defined his decade in power – or sixteen years as Southwark Labour group leader – as much by what he has achieved as by what he has fought against. He bills it as a ‘decade of delivery’ – largely at odds, rather than in tandem with successive Conservative governments, railing against the right-to-buy scheme that continues to sap away at the borough’s ambitious housing plans, and condemning the current government for centralising coronavirus responses just when they should be ‘tapping in to the wealth of local knowledge.’

“How can it make sense for [Health Secretary] Matt Hancock to tell a community there’s a local lockdown from Westminster, rather than that decision being made by local government?” he asks. “It doesn’t.” Front page at the start of the crisis

Due to step down back in March, suddenly the world changed, and John was asked by government to stay put until the crisis abated. And whilst the coronavirus pandemic is far from over, the council has now put in place sufficient measures that he feels the time is now right to step down. His successor, Kieron Williams, was elected on Monday night and takes over next week. John will begin the ending of his political career by leaving Town Hall, then stepping down as Chair of London Councils in October and relinquishing his role as co-Chair of the London Recovery Board, whilst at a later date ceasing to be a councillor in Champion Hill ward, formerly South Camberwell, where he has stood since 2002.

“It’s a different set of challenges I’m passing on to what I thought they would be”, he admitted this week. “Six months ago we were booming locally, and our employment rates were going up and up. Then the pandemic struck. Right at the outset, the government said to local government leaders – spend now, do what’s right and we will support you in the future. But we’re starting to see that this isn’t being followed through.

“This year we will have a ten or fifteen million pound hole in our finances. We can fund it from reserves, because we’ve created opportunities and investment and I draw comfort from that. Otherwise we’d be looking to make cuts right now, with some other boroughs already having to make job and service cuts. We’ll weather it better than some others. But what will happen in 2021/22, where we currently expect a twenty five to thirty five million pound gap?

“It’s a shame. We thought the worst of austerity was over, and whilst we wouldn’t see rises in spending from a Tory government, we wouldn’t see further reductions. Now that has all changed.”

He admits to being worried about some of the borough’s key projects, including the Bakerloo Line – integral to the plans to redevelop the Old Kent Road – and the Elephant & Castle station improvement. “I met with TfL Commissioner Andy Byford two weeks ago and his priorities are our priorities. But TfL’s finances are so precarious – they haven’t agreed a funding deal with the Treasury or Department for Transport beyond October, so yes, you have to be worried.

“I’m still very optimistic about the central London economy. It will bounce back – people will always want to be part of the buzz, and Southwark is part of that. The bigger challenge is how long it will take. We’ve got a very difficult eighteen months to two years ahead of us.

“We’ve been thinking creatively about how we respond and where growth will come from, and I think that for example where a business might have taken a 250,000 sq ft office, now maybe five businesses will take 50,000 sq ft offices. So we’ll continue to see growth and investment. And in the meantime, how do we stimulate the economy? Could we perhaps encourage unused spaces to be taken over by arts organisations, to revitalise those areas?”

Paradoxically, he believes that for some parts of the borough, the coronavirus crisis could be ‘an answer to their prayers’. “The past six months have made people look more closely at their immediate neighbourhood – the idea of fifteen minute cities [with everything on your doorstep]. Local businesses can benefit massively from that, as people realise the value and importance of them. Such as has happened with yourselves – in the lockdown and beyond, Southwark News was there providing people with vital information, and it raised people’s awareness of the role the paper plays locally.”

He admits that the decision to close off some roads under enhanced coronavirus powers in a bid to lower emissions has proved ‘divisive’, and ‘more successful in some parts of the borough than others’, but adds: “You can’t have it all ways, and say ‘I want to live in a clean air environment, but still have all roads open to traffic’. There have to be some trade-offs in this. It’s not just in Southwark, it’s in London. And in trying to achieve our target of zero carbon emissions by 2030, I don’t think people appreciate how our lives are going to have to change to get to that. The challenge for us is to take as many people as possible with us.”

He cites one of his proudest achievements as instigating policies that have changed people’s perception of Southwark.  “A lot of people say, my God it’s changed so much, it’s amazing. Ten years ago I said I wanted Southwark to be seen as a part of central London. I think that really has changed, people see Southwark as absolutely central London and I’m proud of that, having shifted the perception and instituted policies.” Part of that change came about with the controversial move from Camberwell to Tooley Street in London Bridge, in a bid to attract and retain the best people they could at Town Hall. But John argues that the vast changes in the north of the borough, and putting Southwark Council front and centre within those, has served to provide vital investment throughout the borough and will help to get the local economy back on its feet. John’s time in power has seen huge regeneration schemes undertaken, and he still insists that housing is top of his agenda, with a thirty year plan to create 11,000 new homes by 2043. “I’m not going to tolerate anyone living in poor housing conditions. I don’t think that’s the sign of a successful Labour council”, he says. Yet does he regret any of those decisions over decanting, that saw the council pitted against leaseholders, fighting what they said was inadequate financial packages that effectively prevented them from returning to regenerated areas? “I don’t regret the regeneration projects. The pace of them can be frustrating. I wish we were further along the line with the Aylesbury, for example. With decanting, a lot of people simply don’t want to go back, given the timescales involved. And you also have to be careful that you don’t let the interests of a couple of people define the whole project. It’s also true that the drivers for a longterm regeneration project twenty or twenty five years ago will look somewhat strange a quarter of a century on.

“But what I have learned over the last decade is there are individuals who are affected differently, and you need to be able to be flexible and accommodate their needs. I think we’ve become increasingly flexible.”

So what next for Peter John? In 2016 he told the News he had ruled out standing as an MP, but would this keen Blairite, who struggled under the Labour leadership of Jeremy Corbyn, reconsider under new leader Keir Starmer? “No, I won’t be standing as an MP”, he insists. “As a party nationally we have a long way to go, but under Keir people are listening to the Labour party again, we’re back in the game. And the government has been so useless that it’s really important that we have a coherent parliamentary opposition. The importance he places on local government is particularly encouraging. There wasn’t a single occasion in five years of Jeremy Corbyn where he engaged with London council leaders, whereas we’ve already had two or three meetings with Keir. That has to be positive.”

Contrary to some speculation, don’t expect to find John following some of his predecessors and entering the world of property developers. Instead he intends to revive his practice as a barrister, after taking some time off. “And I’d like to do something in public service if possible.”

Will Southwark Labour survive and thrive with the loss of their leader of the past sixteen years? “I’m still around if they want me to chat to! Sometimes it helps to talk things over with people who’ve done your job – I know I found that talking to some former leaders. But it’s for the new leader to take Southwark forward, not me.”

When asked, John reels off a long list of changes he has presided over that he feels have changed Southwark for the better – free school meals, healthy living and free swim and gym, opening up cultural opportunities, and providing Southwark scholarships and tuition fees for local children to go to university. Under his watch, the council has become a London Living Wage employer and Southwark was the first London Living Wage borough, whilst it has instituted an ethical care charter to ‘improve the lot of our social care workforce and those they care for’.

“And we have bucked the trend nationally with employment rates, seeing a ten or eleven per cent increase over the past decade. Anything we can do to help more people into work is what we’re about. We were being more ambitious with this, with apprenticeships, and that plan was hit by the virus – but our ambition wasn’t hit.”

With a bleak economic outlook on the horizon and the prospect of further government cuts to local authorities, can he envisage a future for his successor where councils will simply be reduced to providers of housing and key services, with his ‘core Labour policies’ just a memory of better times? “I hope it’s not the future. If I was still leader it’s not what I’d want, and I’d urge successors to think really carefully about this.

“We’re undoubtedly going to see an increase in food poverty, and there will be a greater need for children to have proper meals. And the council should always be there to help open up opportunities for disadvantaged people. I hope that some of the policies I’ve instigated are so deeply entrenched that they are seen as essential services.” A parting thought. “I was watching Council House Britain on Channel 4 last week, and in the opening thirty seconds a council employee, unprompted, says – ‘in Southwark we treat everyone like they’re a member of our family’. They were quoting one of the Fairer Future values I introduced in 2010.

“To hear that, I thought, ok, that’s embedded, that’s something that’s changed. I’ve made a difference to the way people think. I’m really proud of that.”