IS THE ARCH OVER IN PECKHAM? 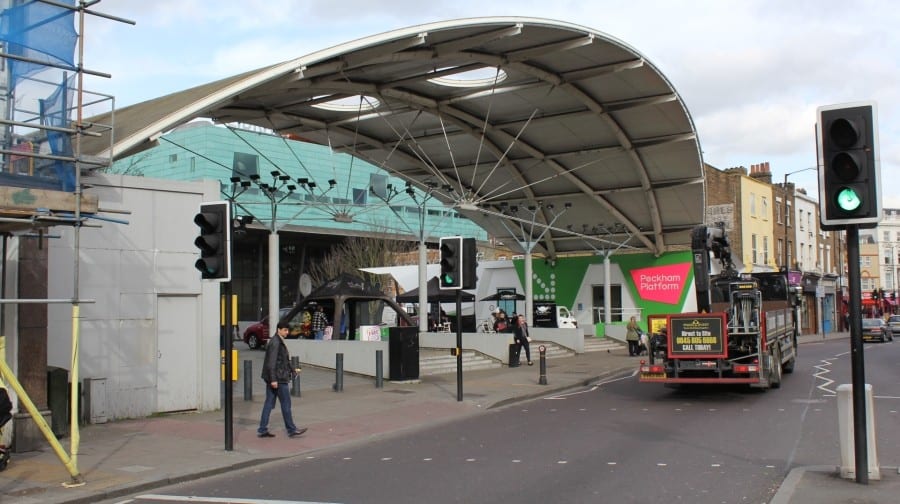 The “iconic” arch covering Peckham Square could be a thing of the past if a plan to remove it and replace it with five storey buildings and a canopy are approved.

The existing public square was commissioned by Southwark Council in 1993, but feedback is now being gathered on a new design, which could see the distinctive arch removed permanently.

There are two versions of preliminary plans put forward by Carl Turner architects – one includes the arch and the other sees it replaced with a smaller canopy flanked by two five storey buildings with commercial and gallery space on the ground floor and flats above.

Removing the arch would allow space for a total of 100 flats to be built across the nine small sites surrounding the square.

A show of hands at the Peckham and Nunhead Community Council meeting on Monday night demonstrated some support for retaining the arch, which was designed by renowned London architects, John McAslan, but feedback received in the co-design consultation have also seen support for its removal.

Peckham architect, Benedict O’Looney, an advocate of Peckham’s regeneration, spoke up in defence of the arch at the meeting, saying it would be a “great tragedy” if it were removed. “It’s such a generous open space. It seems insane to take away something so rare, unusual and an iconic symbol of Peckham,” he said.

Southwark Council’s cabinet member for regeneration, Cllr Mark Williams, said: “We are currently consulting on how we can improve the square in front of Peckham Library, in particular how we can increase the active use of the square with the potential for more shops or cafes.

“Carl Turner Architects have been appointed to carry out this work, one of the options put forward is the removal of the arch which will enable two new buildings to be constructed providing new commercial space and new homes.”

To have a look at the proposals and share your views visit www.peckhamsquare.co.uk.

The sites identified for development in the Carl Turner Architect plans

Southwark NewsNewsIS THE ARCH OVER IN PECKHAM?