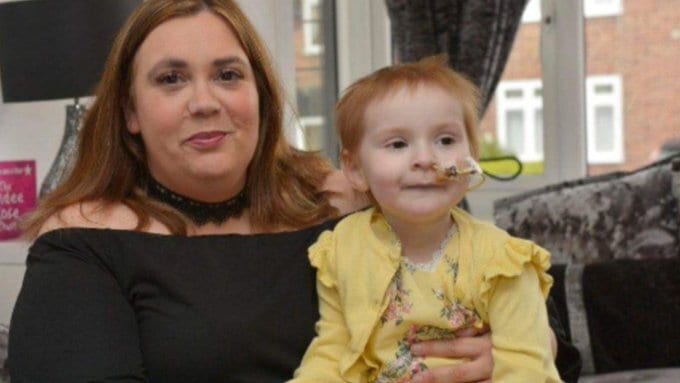 Mum Nicola with her daughter with Isla, who is battling neuroblastoma

A sick troll spread a hoax that a five-year-old girl with cancer had died, forcing her mother to ring her elderly grandparents to tell them it wasn’t true.

The family of Isla Caton, who is battling neuroblastoma, resorted to live videos to disprove the lie, posted through Twitter and WhatsApp.

The fake statement claimed a well-known supporter of Isla’s had confirmed she had passed away, and spread after some mistakenly paid tribute to the toddler. “How dare someone use my child, who has fought for years for everything, and think it’s okay to write such an evil thing,” she said.

“It was spreading like wildfire on WhatsApp. I shouldn’t have to ring my mum, who’s 72, telling her not to pick up the phone, because it’s not true.

“I’m not leaving it, I want something done. As a parent, a mum, I don’t know how people can say stuff like that. They don’t know the effect they have.” Mum Nicola is demanding action over the sick rumour

Isla is well-known among Southwark’s Millwall fans, despite being a Hammers fan, as many Lions supporters have put aside their rivalries to fundraise for the toddler.

The family, of Hornchurch, spent three months in Spain while Isla was undergoing an experimental antibody treatment to tackle her tumours, which was not available on the NHS.

There are no standard treatments available for the aggressive cancer, which primarily targets under-fives, in the UK after relapse. It means families must look to clinical trials.

But money started to run out, and the coronavirus lockdown prevented fundraising from going ahead. “It’s really sad but I always knew that day would come,” said Nicola. “Everything had to be cancelled because of coronavirus.”

Now the Catons are back in England, and pinning their hopes on a new NHS trial to be the breakthrough in Isla’s fight.

“I was contacted by a hospital saying Isla was eligible for the trial, it’s brand-new and has only been around since the start of the year,” she explained.

“We don’t know if it’s going to work, but there wasn’t much else they could do in Spain.”

The trial, called MiNivAn, will be split between University College Hospital and Southampton Hospital, and will take 33 weeks.

It is funded by the NHS and Kids Solving Cancer, a charity. However the fundraising drive is not over for little Isla, as the family still need to raise money for a vaccine trial

Luckily, Isla’s place on the trial was confirmed just last week, a day before the family were planning to fly back out to Spain. It has spared them being caught up in the new quarantine rules affecting travellers to-and-from the country.

“I believe everything happens for a reason,” Nicola told the News. “And it just wasn’t good for Isla’s mental health to be taking her to Spain, she comes on leaps and bounds when she’s at home.”

While new hope beckons over the NHS trial, the Catons ultimately still have to raise yet many more thousands of pounds for a vaccine if Isla becomes clear.

“We’ll still carry on fundraising to get Isla to America for the vaccine,” said Nicola.

“We still need to raise more than £100,000 for the vaccine. Obviously it’s difficult because you still can’t have huge crowds. We’ve just got to carry on as best we can.”